Kids Encyclopedia Facts
This page is about the mall in Mississauga, Ontario. For the mall in Saugus, Massachusetts, see Square One Mall.

Square One Shopping Centre, or simply Square One, is a shopping mall located in Mississauga, Ontario, Canada. It is the largest shopping centre in Ontario and the second largest shopping centre in Canada, after the West Edmonton Mall. It has over 2,200,000 square feet (200,000 m2) of retail space, with more than 360 stores and services. On average, the mall serves over 24 million customers each year. 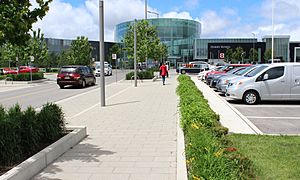 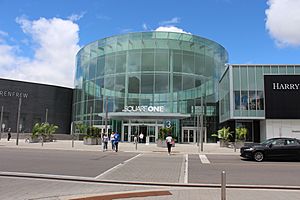 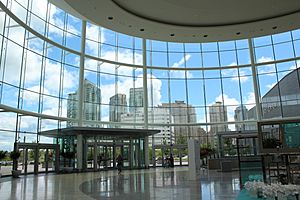 Square One Shopping Centre, Mississauga.View of entrance lobby from inside-out. 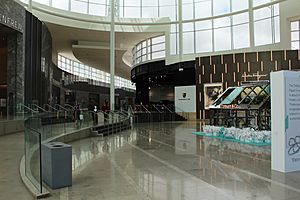 Excavation of the Square One site began in 1969. Construction was finished in 1973, where the mall was first opened to the public. The four original anchors included Woolco, Sears at the time Simpson-Sears, The Bay, and Dominion.

Some stores such as Ashbrook's and Mark & Spencer's were closed in the late 1990s order to make way for the Cityside expansion, which was completed in the early 2000s.

In 1999, Eaton's filed for bankruptcy, closing their location at Square One. Zellers took over the space in 2000.

During January 2011, Target acquired the leases of most Zellers stores, including their location at Square One. Zellers closed in June 2012 and the store was renovated into a Target, which opened to the public on March 30, 2013.

In January 2013, Square One started a major renovation on the main corridor from the Target store to the centre court/food court. Burger King and Bowring were forced to close down due to the expansion of the food court across from the existing food court. The scenic elevator, along with the fountain, were removed and replaced with two escalators. This renovation was completed in Fall 2013. Square One also expanded by adding its concept, Grand Centre Court, which added at least (220,000 sq ft (20,439 m2)) square feet extra.

Sears Canada announced on June 14, 2013 that it would be closing its store at Square One and Yorkdale as of March 9, 2014. On June 27, Empire Theatres announced that they would be selling their theatre at Square One to Landmark Cinemas, which closed one year later.

It was announced on December 6, 2013 that La Maison Simons would take over most of the space occupied by Sears, with a flagship store which opened in Spring 2016.

The South Expansion was completed on March 1, 2016 adding numerous retailers and a Holt Renfrew anchor store, along with removing the Dollarama and Home Outfitters stores.

In June 2018, Square One announced the West Expansion, which took place in the former Target location that closed in 2015. The expansion opened between Fall 2018 and Spring 2019 and added several brands like Uniqlo and The Rec Room, as well as a 34,000 sq. ft. local food emporium, The Food District.

Chapters closed in January 2019 and reopened as Indigo in the West Expansion in February 2019.

Square One has had many anchor stores throughout its history:

All content from Kiddle encyclopedia articles (including the article images and facts) can be freely used under Attribution-ShareAlike license, unless stated otherwise. Cite this article:
Square One Shopping Centre Facts for Kids. Kiddle Encyclopedia.