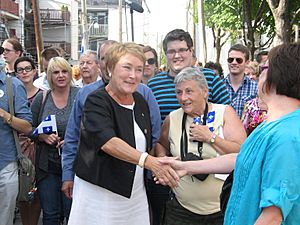 The Parti Québécois, or PQ was founded by René Lévesque. PQ's main goals are to get independence for Québec. In the provincial election of 1976, the Parti Québécois was elected to the government of Québec for the first time and René Lévesque, became the premier of Quebec. Many French people in Québec were happy to see the Lévesque as premier, while many English people were not happy..

The PQ passed a bill called Bill 101. This bill is a law that makes French the languages used most in Quebec, even though English and French are the languages spoken in Canada. The party was elected again in the 1981 election, but in November 1984 founder René Lévesque left the party and the PQ lost the 1985 election.

The current Bloc Québécois leader Gilles Duceppe was the first to announce that he would to try to become the leader of the PQ, on May 11, 2007. Pauline Marois also said she was going to try to become leader, but Duceppe changed his mind on the 12th leaving Marois the only candidate. On June 26, 2007 Marois won the leadership. Pauline Marois is the current leader of the PQ. She has said that the PQ plans to have another referendum in the future.

Relationship with the Bloc Québécois

The Bloc Québécois is a federal political party in Canada that was made in 1990 by future PQ leader Lucien Bouchard. The Bloc also wants sovereignty for Québec. The two parties help each other during elections.

All content from Kiddle encyclopedia articles (including the article images and facts) can be freely used under Attribution-ShareAlike license, unless stated otherwise. Cite this article:
Parti Québécois Facts for Kids. Kiddle Encyclopedia.