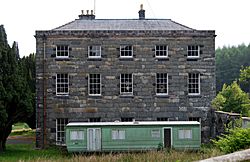 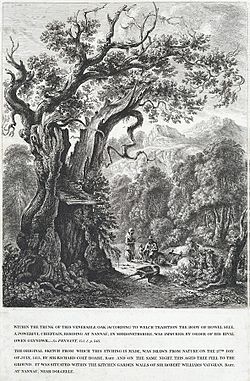 Nannau is a mansion and estate in the parish of Llanfachreth, Meirionnydd. It is named for the family who lived there.

The Nannau family is descended from the princes of Powys through the 13th century prince Ynyr Hen. The family were patrons of famous poets of the period, and the mansion is mentioned in several poems from the 14th century onwards. The poet Llywelyn Goch ap Meurig Hen was a part of the family. Siôn Dafydd Las (died 1694), of the Nannau bard family, is considered to be one of the last of the traditional family poets in Wales. 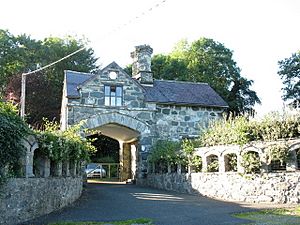 The gates
The Nannau estate merged with Hengwrt at the beginning of the 18th century when one of the granddaughters of Huw Nannau (a sponsor and antiquarian) married Robert Vaughan, great grandson of the famous antiquarian Robert Vaughan of Hengwrt,

All content from Kiddle encyclopedia articles (including the article images and facts) can be freely used under Attribution-ShareAlike license, unless stated otherwise. Cite this article:
Nannau, Wales Facts for Kids. Kiddle Encyclopedia.