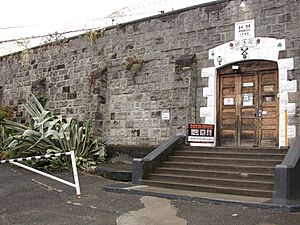 Entrance to the prison.

Napier Prison was a prison in Napier, New Zealand's oldest prison. It is now an historic facility, which offers guided day and night tours by appointment and self-guided audio tours all day. It is also the only building where it is possible to see the original path of the 1931 Hawke's Bay earthquake.

Napier Prison was constructed on Napier Hill in 1862 and was used until the early 1990s, being officially decommissioned in 1993. In addition to being a prison, the location was also used as an orphanage and a psychiatric unit. During the 19th century, four hangings were conducted at the prison. John Purcell served as superintendent of the old Napier Prison. Napier Prison has been open for entertainment and tours.

In 2002, it was opened as a tourist attraction. The prison was used as the venue for the filming of the 2006 television show Redemption Hill. Also featured in the "Off the Rails" TV series.

There have been many reports of ghostly occurrences at the site such as unexplained footsteps, disembodied faces, doors opening and closing on their own, and the ghost of a murderer on the anniversary of his execution. The best known former prisoner is Roland Edwards, a mass murderer whose spirit is said to haunt the area. He died on July 15 and paranormal activity is reputedly more prevalent around the anniversary of his death. In 2011, a team from the television series Ghost Hunters International spent four days filming at the prison, which was criticized as "the lowest common denominator of a reality TV show".

All content from Kiddle encyclopedia articles (including the article images and facts) can be freely used under Attribution-ShareAlike license, unless stated otherwise. Cite this article:
Napier Prison Facts for Kids. Kiddle Encyclopedia.