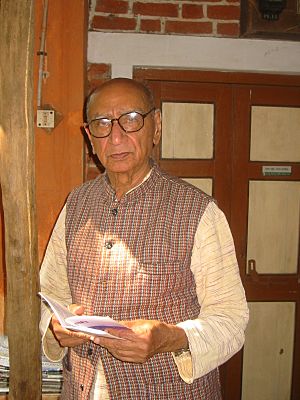 Narayan Desai (24 December 1924 – 15 March 2015) was an Indian Gandhian and author. He was the son of Mahatma Gandhi's personal secretary and biographer Mahadev Desai. He was born in Bulsar (now Valsad), Gujarat. During his career, he wrote many books about the ideas and life of Gandhi.

Desai died in Surat, India from a short-illness, aged 90.

All content from Kiddle encyclopedia articles (including the article images and facts) can be freely used under Attribution-ShareAlike license, unless stated otherwise. Cite this article:
Narayan Desai Facts for Kids. Kiddle Encyclopedia.