Narrows of the Green facts for kids 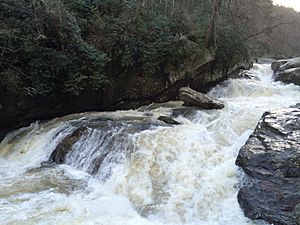 The Green Narrows is best known for being one of the most extreme kayaking runs in the Eastern US. Water is released on a regular basis from the Tuxedo Power station with a 100% release being equivalent to 216 cubic feet per second (6.1 m3/s). This regular flow allows for year-round kayaking and is part of the reason the Green is such a notorious and well known river.

The river has an average gradient of 178 feet per mile (33.7 m/km or 3%) with a half mile (800 m) section dropping roughly 342 feet (104 m) and containing 11 major class IV+ to V+ rapids. Through this area the water often channels through extremely tight slots as narrow as 4 feet (1.2 m) wide as the river funnels through a stunning gorge. The three major rapids on the river ("The Big Three") are called "Go Left and Die", "Gorilla" and "Sunshine". Gorilla is considered the most visually impressive rapid on the river. It consists of the river funneling into a 4-foot (1.2 m)-wide slot ("The Notch") and is then immediately followed by an 18-foot (5.5 m) waterfall ("the flume") and then another 10-foot (3.0 m) waterfall ("Scream Machine"). Sunshine is considered the most difficult and dangerous rapid, and consists of a 14-foot (4.3 m) waterfall landing on a jagged rock shelf below. The route through Sunshine is about 4 feet (1.2 m) wide and mistakes here have been known to cause paralysis. The river gets considerably more difficult at higher water levels, however the Green has been run at up to 300% flows (over 30" on the stick gauge).

On the first Saturday of November many of the best paddlers in the world descend on the Green to participate in the annual Green Race. The race is considered by many as the most competitive and coveted whitewater race on the planet. Since 1996, the staggering amount of video, blog posts, magazine articles, and mega-pixels captured by still cameras at the Green Race can not be estimated, nor can the nervousness of new contestants and the pride of participation.

However, it is only for an unknown reason and historical twist of fate that paddlers still have the Green River to enjoy today, for in 1906 it was nearly dammed in four places (instead of the one dam upstream built around 1921). The engineers for the four dam concept were Ladshaw and Ladshaw from Spartanburg, SC, and the now annual celebration of man's mysterious failure to advance is called "Ladshaw Day". At Ladshaw Day parties across the southeast, paddlers make the toast with no small amount of irony, humor, and gratitude: "To Ladshaw!".

All content from Kiddle encyclopedia articles (including the article images and facts) can be freely used under Attribution-ShareAlike license, unless stated otherwise. Cite this article:
Narrows of the Green Facts for Kids. Kiddle Encyclopedia.