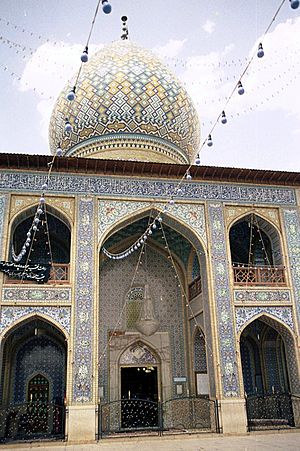 The mosque includes extensive coloured glass in its facade, and displays other traditional elements such as the Panj Kāse ("five concaved") design. It is named in popular culture as the 'Pink Mosque', due to the usage of considerable pink colour tiles for its interior design.

The mosque was built during the Qajar dynasty, and is still in use under protection by the Endowment Foundation of Nasir ol Molk. Construction began in 1876 by the order of Mirzā Hasan Ali (Nasir ol Molk), a Qajar ruler. and was completed in 1888, The designers were Mohammad Hasan-e-Memār, an Iranian architect, and Mohammad Rezā Kāshi-Sāz-e-Širāzi.

Restoration, protection, and maintenance of this monument is being continued by the Endowment Foundation of Nasir ol Molk. The colourful windows and doors are handcrafted by carpenter master Hajj Mirza Ayat.

All content from Kiddle encyclopedia articles (including the article images and facts) can be freely used under Attribution-ShareAlike license, unless stated otherwise. Cite this article:
Nasir al-Mulk Mosque Facts for Kids. Kiddle Encyclopedia.