The National Oceanography Centre Southampton (NOCS) is a centre for research, teaching, and technology development in Ocean and Earth science. NOCS was created in 1995 jointly between the University of Southampton and the UK Natural Environment Research Council and is located within the port of Southampton at a purpose-built dockside campus with modern facilities. In 2010 the University and NERC components demerged, and the NERC-managed component became the National Oceanography Centre (NOC – with the Proudman Oceanographic Laboratory in Liverpool). The two components of NOCS continue close collaboration through the jointly run Graduate School, shared research facilities and laboratories, complementary research groups, and many joint research grants and publications. The University component “Ocean and Earth Science, National Oceanography Centre Southampton” (OES) is part of the Faculty of Environmental and Life Sciences, (FELS). It was ranked 46th in the world for Earth and Marine Sciences by the QS World University Rankings in 2019.

In November 2019, NOC became formally independent from the NERC and now operates as a company limited by guarantee with charitable status. 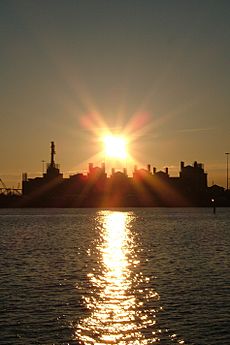 The centre can trace its origins back to the years immediately after Second World War, when the National Institute of Oceanography (NIO) was founded.

The Centre's inaugural director from 1994-99 was John Shepherd, a former Deputy Director of the Ministry of Agriculture, Fisheries and Food and an Earth system scientist.

Research at NOCS listed by groups affiliated with the University of Southampton’s Ocean and Earth Science department (OES) and the Southampton branch office of the National Oceanography Centre:

OES is ranked 30th in the world for Earth and Marine Sciences by the QS World University Rankings, rising from 47th in 2012 and 38th in 2013. 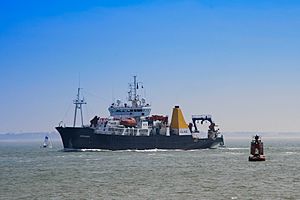 NOCS is the base for the purpose-built research vessels RRS Discovery and RRS James Cook (and formerly RRS Charles Darwin). In 2014 the RRS Discovery has been replaced and the new Discovery will remain based at NOCS. For fieldwork and research by university staff and students OES further operates three vessels, including the 19.75 metres (64.8 ft) catamaran RV Callista and the 12 metres (39 ft) RV Bill Conway.

NOCS is home to the Marine Autonomous and Robotic Systems group; part of National Marine Facilities Sea Systems, which has the mission to "develop, coordinate and provide capabilities, platforms and expertise to meet the needs of UK marine science." The group operates three fleets of submersibles and autonomous vehicles, comprising Autosub submarines, underwater gliders and remotely operated vehicles.

NOCS has multi-use aquarium facilities with a variety of tanks displaying a range of biotopes and habitats, including seagrass beds, rocky shores and rock pool environments. Additionally, NOCS is operating two IPOCAMPs and a number of smaller pressurized tanks for the study of deep-sea organisms. The NOCS Coral Reef Laboratory at NOCS is equipped with a multi-compartment aquarium system that houses a range of corals and other cnidarians.

NOCS has a variety of large and small analytical instrumentation. The Magnetism Laboratory is equipped with a MicroMag 3900 Vibrating Sample Magnetometer, an AGICO KLY4S Kappabridge and a 2G Superconducting Rock Magnetometer. The X-Ray Diffraction facility is equipped with a X’Pert pro XRD machine with Cu X-ray tube. For geochemical analysis NOCS houses a range of large analytical instrumentation, including a Thermo NEPTUNE multi collector inductively coupled plasma mass spectrometry system (MC-ICP-MS), a Thermo X-SERIES 2 Quadrupole ICP-MS, a Thermo ELEMENT 2XR high-resolution ICP-MS, a Thermo TRITON and a VG Sector 54 Thermal Ionization system, a New Wave UP193FX laser ablation system. For analysis of dissolved organic carbon and total dissolved nitrogen the Southampton-based branch of the NERC NOC is operating a Shimandzu TOV V CPN-TN at NOCS. For seismic studies of the seafloor, sediment packages and sub-seafloor structures the Marine Geophysics group at NOCS operates a wide range of instrumentation, including Chirp, Boomer, Sparker and 3D Chirp sources, single- and multi-channel hydrophones, several multibeam systems and a sidescan sonar. The Ocean Bottom Instrumentation Consortium based at NOCS provides the academic and commercial communities with access to a range of multi-sensor seabed instruments.

The British Ocean Sediment Core Repository (BOSCORF) located at NOCS and operated by NERC is the central storage facility for sediment cores collected by NERC ships and NERC-funded research. All cores are logged and all data generated from the cores is archived for visualization and open access.

Both OES and National Oceanography Centre have joined Athena SWAN. OES was awarded an Athena SWAN Bronze Award, showing that the wider university had "a solid foundation for eliminating gender bias and developing an inclusive culture that values all staff", and that the department had "identified particular challenges" and was "planning activities for the future".

In July 2008 NOCS achieved ISO14001 certification (see ISO 14000) for its Environmental Management System. As part of the wider efforts to conserve electrical power and water consumption 544 solar panels and waterless urinals were installed. 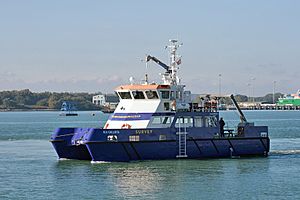 The Graduate School of the National Oceanography Centre Southampton offers degree programs at both Master and PhD level. Furthermore, NOCS is the lead of the Southampton Partnership for Innovative Training of Future Investigators Researching the Environment consortium, which also includes the British Antarctic Survey, Plymouth Marine Laboratory, the Natural History Museum, London, the NERC Centre for Ecology & Hydrology, and others. The consortium is funded through NERCs Doctoral Training Partnership initiative.

NOCS reaches out to the general public interested to learn more about the world's oceans, marine biology and the natural environment in general. Activities and events include an annual Ocean and Earth Day, a public seminar series of marine life talks, and "Discover Oceanography" sessions aboard Callista.

All content from Kiddle encyclopedia articles (including the article images and facts) can be freely used under Attribution-ShareAlike license, unless stated otherwise. Cite this article:
National Oceanography Centre, Southampton Facts for Kids. Kiddle Encyclopedia.