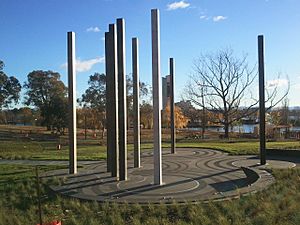 The National Workers Memorial in 2013

The National Workers Memorial in the national capital, Canberra, Australian Capital Territory, is Australia's place for honouring workers who have died as a result of work-related accidents, incidents and disease.

In May 2011, the Australian Government provided funding for the design and construction of a memorial "to honour and pay tribute to working Australians who have died as a result of work-related accidents, incidents and disease". The other stated purposes are:

Workplace deaths amount to around 300 per year in Australia.

The site in Canberra is within the sound of the bells of the National Carillon, in Kings Park, Canberra, beside Lake Burley Griffin. The other memorials nearby are:

The memorial has been sanctioned by the National Capital Authority as the memorial is within the Parliamentary Triangle of Canberra.

The memorial consists of eight tall stone poles, symbolically sighted across a stylised map of Australia in the places of the state and territory capital cities. Architectural firm Johnson Pilton Walker has placed concentric circles around the poles with words representing the intended outcome of knowledge and application of good practices of work health and safety.

The lead-in path has two inscriptions along its edge, saying:

Construction is reported to have cost A$3 million.

The inauguration ceremony was held on Sunday 28 April 2013.

All content from Kiddle encyclopedia articles (including the article images and facts) can be freely used under Attribution-ShareAlike license, unless stated otherwise. Cite this article:
National Workers Memorial (Australia) Facts for Kids. Kiddle Encyclopedia.