Australia's National Police Memorial is in the national capital, Canberra, in King's Park on the northern shore of Lake Burley Griffin adjacent to the National Carillon on Aspen Island. It commemorates Australian police who have died on duty. 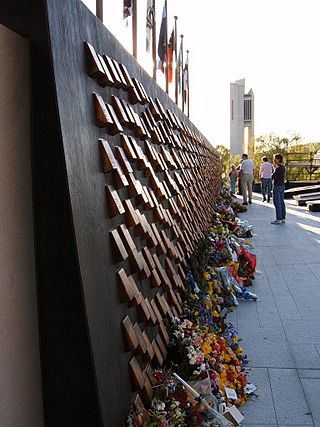 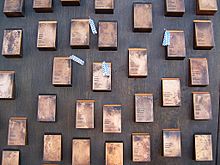 Touchstones with names of police who died on duty. 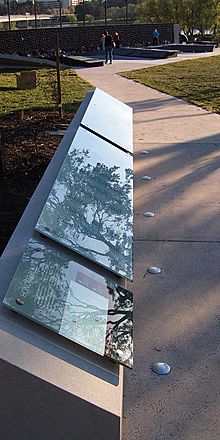 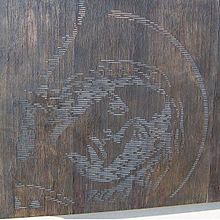 The two key elements of the design are:

The surface of the touchstone wall is clad in cast bronze panels with a slight textural feel and a dark patina. The surface of the cladding is smooth enough to allow the patina to have a gloss wax finish. The touchstones are also cast bronze but have a golden, almost polished patina, that will change over time with the degree to which each stone is touched. There are 1200 touchstones, which is meant to symbolise the ongoing danger for police on duty.

The 'terrain' tilts to direct visitors to the wall, with undulations that is intended to create "an uncertainty in experience and reflects the uncertain path that police tread in the performance of their duty."

Access roads have been constructed from King's Avenue, joining to the previous the lakeside road.

A competition for the design was sponsored by the Australasian Police Ministers' Council (APMC), launched on 2 March 2005 by Senator Christopher Ellison, the Federal Minister for Justice and Customs. 77 entries were submitted by its close on 29 April 2005.

The memorial cost A$2.4 million.

The winning entry was by Fairweather Proberts Architects (Brisbane).

The Australian Federal Police Recognition and Ceremonial Team were given the honour in managing the Dedication Project.

Dedication of the NPM

The Master of Ceremonies was Ita Buttrose.

More than 700 police from all states and the Australian Federal Police were gathered for the official opening, the first time since the opening of Old Parliament House in 1927 that there had been such a mass gathering of Australian police in Canberra.

The first policeman to die on duty was Constable Joseph Luker, aged 38, who died on 26 August 1803, after being bludgeoned to death when Sydney was only 15 years old.

NSW Police Force members have suffered the largest losses of all Australian Police Forces, and to that end the last Australian Police Officer to die on duty before the official dedication was New South Wales Police Force Sergeant Colin McKenzie, aged 50, who died on 28 September 2006, the eve of the official opening, after falling ill at the Dedication rehearsal session at the National Police Memorial in Canberra. This 30-year veteran New South Wales Police Force policeman complained to colleagues of feeling ill, then collapsed and died. In memory of the Sergeant, Sergeant McKenzie's cap was carried by a NSW Police Force Sergeant on a cushion, leading the NSW Police Force Contingent in the march from Old Parliament House to the NPM in Kings Park, Canberra in a moving tribute.

All content from Kiddle encyclopedia articles (including the article images and facts) can be freely used under Attribution-ShareAlike license, unless stated otherwise. Cite this article:
National Police Memorial (Australia) Facts for Kids. Kiddle Encyclopedia.