Verticordia pennigera, commonly known as native tea, is a flowering plant in the myrtle family, Myrtaceae, and is endemic to the south-west of Western Australia. It is usually a small erect or prostrate shrub with small leaves and lightly-scented spikes of pale pink to magenta-coloured flowers in spring. 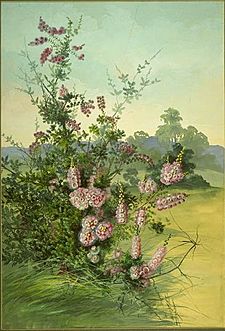 Verticordia pennigera was first formally described in 1837 by Stephan Endlicher from a specimen collected near the Swan River by Charles von Hügel. The description was published in Enumeratio plantarum quas in Novae Hollandiae ora austro-occidentali ad fluvium Cygnorum et in sinu Regis Georgii collegit Carolus Liber Baro de Hügel. In his review of the genus Verticordia in 1991, Alex George selected a lectotype from the collections of James Drummond. The specific epithet (pennigera) is derived from a Latin word meaning "feather-bearer".

This verticordia usually grows in soils that are sandy or clay types and which are frequently gravelly or granitic. It occurs in a broad area from Kalbarri National Park to the Bremer River area in the Avon Wheatbelt, Carnarvon, Esperance Plains, Geraldton Sandplains, Jarrah Forest, Mallee and Swan Coastal Plain biogeographic regions.

Verticordia halophila is classified as "not threatened" by the Western Australian Government Department of Parks and Wildlife.

There is a wide variety of forms of native tea in cultivation, from open shrubs with rigid stems to prostrate, bushy forms. There is also some variation in the size and colour of the flowers. Propagation is usually from cuttings. Some forms adapt well to winter rainfall areas but all do best when grown in a sunny position in well-drained soil.

All content from Kiddle encyclopedia articles (including the article images and facts) can be freely used under Attribution-ShareAlike license, unless stated otherwise. Cite this article:
Native tea Facts for Kids. Kiddle Encyclopedia.