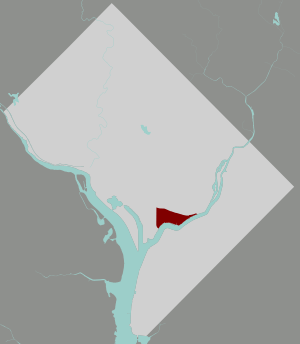 Map of Washington, D.C., with Navy Yard highlighted in maroon. 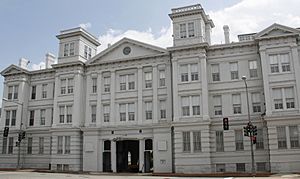 Latrobe Gate, the ceremonial entrance to the Washington Navy Yard

Historically, the Anacostia River was once a deep water channel with natural resources and home to the Nacotchtank Indians. In 1791, Pierre Charles L’Enfant designed the plan for Washington D.C. and, recognizing the worth of the Anacostia River, set up the city’s new commercial center and wharfs there. In 1799, the Washington Navy Yard was built in the area and for many decades was the nation’s largest naval shipbuilding facility. Today, the Washington Navy Yard has been run by the Navy longer than anywhere else.

The Navy Yard was a busy center in the 19th century and was important in the development of the area. The lively wharf was a center for jobs, serving ships with lumber and raw materials for the growing city. It also played a key role in defending the city from the British during the War of 1812. Surrounding the wharfs was a large commercial district, light industrial businesses, and one of the city’s most notable neighborhoods. As the city and nation developed, the Navy Yard changed from ship building to making finished ship products and weapons ammunition. By the mid-1940s in wartime the Navy Yard and the expanded Annex area were making the most ammo with 26,000 employees in 132 buildings on 127 acres (0.51 km2) of land. 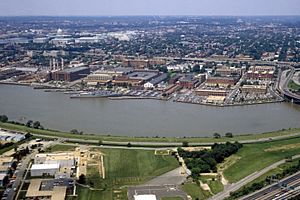 Washington Navy Yard and area, around 1985

However, during the 20th century the river got worse. The pollution of the river made it less valuable to the city. After World War II, the Navy Yard moved everything to a smaller campus, slowing commerce in the area. For this and other reasons the riverfront neighborhoods became overrun with crime. 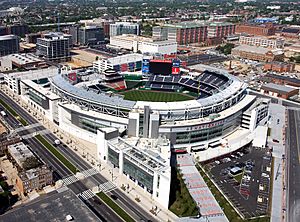 For many years, the neighborhood was an industrial district The area was formerly home to a large commercial and adult-entertainment district, which has now been displaced. Since 1990, the building of a new U.S. Department of Transportation office complex and Nationals Park, the new USD$600 million stadium of the Washington Nationals Major League Baseball team, caused quick changes in the neighborhood. Most of the neighborhood's land and businesses have been purchased by companies and is currently being developed into commercial and residential projects. 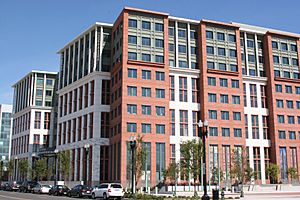 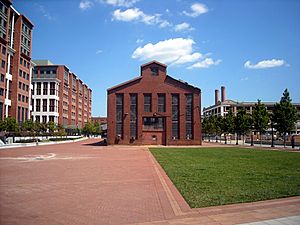 Building 170, behind the USDoT headquarters

All content from Kiddle encyclopedia articles (including the article images and facts) can be freely used under Attribution-ShareAlike license, unless stated otherwise. Cite this article:
Navy Yard, Washington, D.C. Facts for Kids. Kiddle Encyclopedia.