The society has recovered and now utilises station buildings from a couple of former stations on the Nelson Section, including the Tui Railway Station building.

The society uses a DSA class diesel locomotive on running days, and restored a WF class steam locomotive WF 403. 403 has not yet been steamed nor is in usual service due to its six driving wheels being unable to negotiate the curves of the society's line. 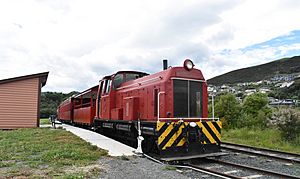 The society was originally incorporated as the "Grand Tapawera Railroad Company" with the intention of establishing and operating a line on the original formation of the Nelson Section near Motupiko.

All content from Kiddle encyclopedia articles (including the article images and facts) can be freely used under Attribution-ShareAlike license, unless stated otherwise. Cite this article:
Nelson Railway Society Facts for Kids. Kiddle Encyclopedia.