Nepenthes rowaniae ( after Ellis Rowan, Australian naturalist and illustrator) is a species of pitcher plant endemic to the Cape York Peninsula, Australia. It is closely related to N. mirabilis and was once considered an extreme form of this species. 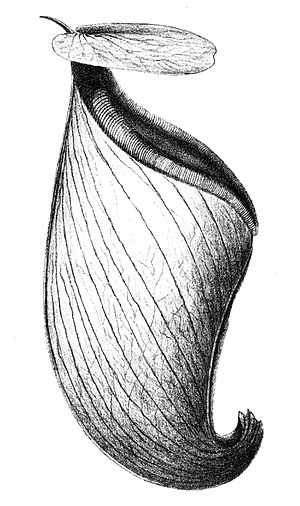 Bailey's original illustration of an N. rowaniae pitcher, published in 1897

Between 1881 and 1905, Frederick Manson Bailey described 11 species of Nepenthes from northern Australia, all of which were placed in synonymy with N. mirabilis by B. H. Danser in 1928. The only taxon which Danser considered to possess morphological characters atypical of N. mirabilis was N. rowaniae. He wrote:

"Of all these I have seen the type or at least authentic specimens, but they are nearly all mere growth forms of N. mirabilis. Only N. rowanae shows a character not yet met with in N. mirabilis, viz. campanulate-infundibuliform upper pitchers. A similar aberration, however, is often met with in several allied species and is certainly insufficient for specific distinction."

However, field observations carried out between 2001 and 2003 "showed that N. rowanae]. Carnivorous Plant Database.</ref>

According to the ICBN, the correct spelling of this taxon's name is Nepenthes rowaniae, as the epithet is based on the personal name Rowan. There is only one correct way to form this epithet (in the genitive: Rec 60C.1.b.) and the resulting correct spelling is mandatory; any usage of the spelling rowanae is to be corrected to rowaniae (Art 60.11). However, the literature tends to use Nepenthes rowanae, instead.

All content from Kiddle encyclopedia articles (including the article images and facts) can be freely used under Attribution-ShareAlike license, unless stated otherwise. Cite this article:
Nepenthes rowaniae Facts for Kids. Kiddle Encyclopedia.