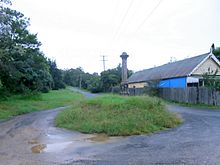 Nerrigundah is a small village on the Eurobodalla Nature Coast in south eastern New South Wales. Situated at the head of the Tuross River Valley, it is nineteen kilometres inland from Bodalla. At the 2006 census, Nerrigundah had a population of 100 people. The place name is derived from an aboriginal word for 'camp where edible berries grow'.

Nerrigundah and its valley were used as a cattle run by Thomas Mort of Bodalla prior to the discovery of gold on 23 December 1860 by George Cook, Joseph Goodenough and William Crouch. The discovery of gold was recorded at the office of the Gold Commissioner at Braidwood, New South Wales on 2 January 1861.

On 8 April 1866 Nerrigundah was raided by the Clarke brothers, Thomas and John, and their associates. They held up a number of passers-by outside the town at Deep Creek and then attacked the store and hotel. During the raid William Fletcher, a new recruit to the Clarke gang was shot dead as was Trooper Miles O'Grady when he tried to intervene (see photo of memorial obelsik above). Trooper Miles O'Grady was buried in Moruya.

All content from Kiddle encyclopedia articles (including the article images and facts) can be freely used under Attribution-ShareAlike license, unless stated otherwise. Cite this article:
Nerrigundah, New South Wales Facts for Kids. Kiddle Encyclopedia.