Network topology is the layout of the connections (links, nodes, etc.) of a computer network.

There are two main

The names used - such as ring or star - are only rough descriptions. The computers on a home network can be arranged in a circle but it does not necessarily mean that it represents a ring network.

There are seven basic topologies:

Which of these is chosen depends on what devices need to be connected, how reliable it has to be, and the cost associated with cabling.

Easiest to understand, of the variations of point-to-point topology, is a point-to-point communications channel that appears, to the user, to be permanently associated with the two endpoints. A children's "tin-can telephone" is one example, with a microphone to a single public address speaker is another. These are examples of physical dedicated channels.

Within many switched telecommunications systems, it is possible to establish a permanent circuit. One example might be a telephone in the lobby of a public building, which is programmed to ring only the number of a telephone dispatcher. "Nailing down" a switched connection saves the cost of running a physical circuit between the two points. The resources in such a connection can be released when no longer needed, for example, a television circuit from a parade route back to the studio.

Using circuit-switching or packet-switching technologies, a point-to-point circuit can be set up dynamically, and dropped when no longer needed. This is the basic mode of conventional telephony. 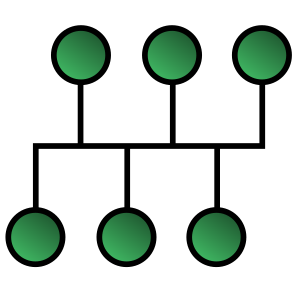 In local area networks where bus topology is used, each machine is connected to a single cable. Each computer or server is connected to the single bus cable through some kind of connector. A terminator is required at each end of the bus cable to prevent the signal from bouncing back and forth on the bus cable. A signal from the source travels in both directions to all machines connected on the bus cable until it finds the MAC address or IP address on the network that is the intended recipient. If the machine address does not match the intended address for the data, the machine ignores the data. Alternatively, if the data does match the machine address, the data is accepted. Since the bus topology consists of only one wire, it is cheap to implement compared to other topologies. However, there is a higher cost of managing the network. Additionally, since only one cable is used, if the network cable breaks, the whole network will be shutdown 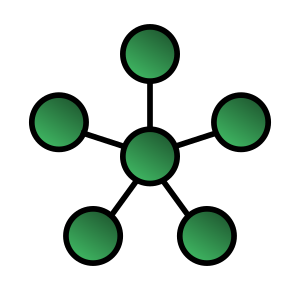 In local area networks with a star topology, each network host (for example a PC) is connected to a central hub with a point-to-point connection. All traffic on the network passes through the central hub. The hub acts as a signal booster or repeater. The star topology is considered the easiest topology to design and implement. An advantage of the star topology is the simplicity of adding additional nodes. The primary disadvantage of the star topology is that it may need a lot more cables, and if the hub breaks everything will stop working.And if the information is to be passed only to to single computer than it can't be done in this topology i.e. all the computers interact with each other and the information will be shared to all the computers. information cannot be shared to a single computer in this topology. 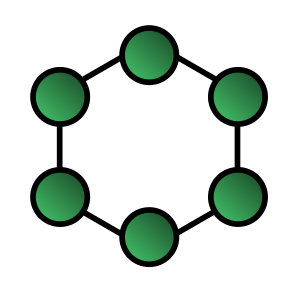 A network topology that is set up in a circular fashion in which data travels around the ring in one direction and each device on the right acts as a repeater to keep the signal strong as it travels. Each device incorporates a receiver for the incoming signal and a transmitter to send the data on to the next device in the ring. The network is dependent on the ability of the signal to travel around the ring. 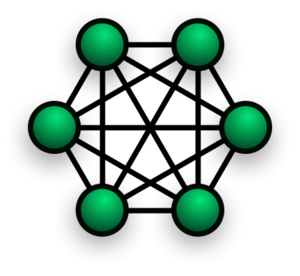 In most practical networks that are based upon the partially connected mesh topology, all of the data that is transmitted between nodes in the network takes the shortest path between nodes. The network used a longer alternative path in the case of a failure or break in one of the links. This requires that the nodes of the network possess some type of logical 'routing' algorithm to determine the correct path to use at any particular time. 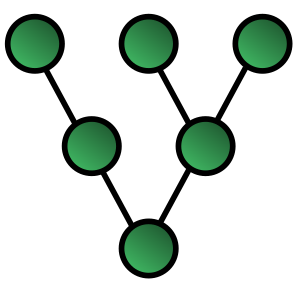 Also known as a hierarchy network.

Each node in the network having a specific fixed number, of nodes connected to it at the next lower level in the hierarchy, the number, being referred to as the 'branching factor' of the hierarchical tree. This tree has individual peripheral nodes.

Logical topology describes the way in which a network transmits information from network/computer to another and not the way the network looks or how it is laid out. The logical layout also describes the different speeds of the cables being used from one network to another.

The logical topology, in contrast to the "physical", is the wignals act on the network media, or the way that the data passes through the network from one device to the next without regard to the physical interconnection of the devices. A network's logical topology is not necessarily the same as its physical topology. For example, twisted pair Ethernet is a logical bus topology in a physical star topology layout. While IBM's Token Ring is a logical ring topology, it is physically set up in a star topology.

Except for star-based networks, the easiest way to add more computers into a network is by daisy-chaining, or connecting each computer in series to the next. If a message is intended for a computer partway down the line, each system bounces it along in sequence until it reaches the destination. A daisy-chained network can take two basic forms: linear and ring.

A tree topology (a.k.a. hierarchical topology) can be viewed as a collection of star networks arranged in a hierarchy. This tree has individual peripheral nodes (e.g. leaves) which are required to transmit to and receive from one other node only and are not required to act as repeaters or regenerators. Unlike the star network, the functionality of the central node may be distributed.

In order to alleviate the amount of network traffic that comes from broadcasting all signals to all nodes, more advanced central nodes were developed that are able to keep track of the identities of the nodes that are connected to the network. These network switches will "learn" the layout of the network by "listening" on each port during normal data transmission, examining the data packets and recording the address/identifier of each connected node and which port it's connected to in a lookup table held in memory. This lookup table then allows future transmissions to be forwarded to the intended destination only.

In a mesh topology (i.e., a partially connected mesh topology), there are at least two nodes with two or more paths between them to provide redundant paths to be used in case the link providing one of the paths fails. This decentralization is often used to advantage to compensate for the single-point-failure disadvantage that is present when using a single device as a central node (e.g., in star and tree networks). A special kind of mesh, limiting the number of hops between two nodes, is a hypercube. The number of arbitrary forks in mesh networks makes them more difficult to design and implement, but their decentralized nature makes them very useful. This is similar in some ways to a grid network, where a linear or ring topology is used to connect systems in multiple directions. A multi-dimensional ring has a toroidal topology, for instance.

A fully connected network, complete topology or full mesh topology is a network topology in which there is a direct link between all pairs of nodes. In a fully connected network with n nodes, there are n(n-1)/2 direct links. Networks designed with this topology are usually very expensive to set up, but provide a high degree of reliability due to the multiple paths for data that are provided by the large number of redundant links between nodes. This topology is mostly seen in military applications. However, it can also be seen in the file sharing protocol BitTorrent in which users connect to other users in the "swarm" by allowing each user sharing the file to connect to other users also involved. Often in actual usage of BitTorrent any given individual node is rarely connected to every single other node as in a true fully connected network but the protocol does allow for the possibility for any one node to connect to any other node when sharing files.

All content from Kiddle encyclopedia articles (including the article images and facts) can be freely used under Attribution-ShareAlike license, unless stated otherwise. Cite this article:
Network topology Facts for Kids. Kiddle Encyclopedia.