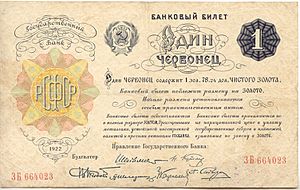 Reestablishment of a stable currency, the gold-backed chervonets, was an essential policy component of the Soviet state's return to a money-based economy.

New Economic Policy is the name for the new economy introduced by Lenin after the failed methods of War communism. These New Economic Policies were to revive the Russian economy. The new policy was a combination of private enterprise and state socialism. This is because the people did not believe in War communism.

The New Economic Policies meant that Russia returned to a partly capitalist society. This sorted out the problems of mass starvation and Famine which War communism had caused.

Lenin did not want Russia to stay in this way, he only introduced them to be supported again by the Russian people, and to revive the economy.

All content from Kiddle encyclopedia articles (including the article images and facts) can be freely used under Attribution-ShareAlike license, unless stated otherwise. Cite this article:
New Economic Policy Facts for Kids. Kiddle Encyclopedia.