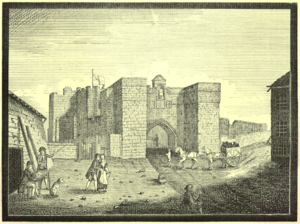 The New Gate of Newcastle, England, was a city gate in Newcastle town wall dating to the fourteenth century or before, which for centuries housed a gaol. It gives its name to Newgate Street. 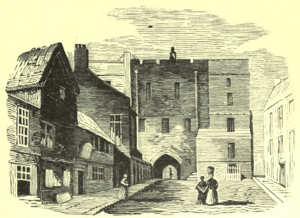 Newcastle's town walls were constructed in the 13th and 14th centuries. The New Gate of Newcastle, occupying a position on a northern section of wall, is mentioned as far back as the fourteenth century. From its name, it has been surmised that it stood on the site of an older structure; Eneas Mackenzie expressed the opinion that this latter must have been the Berwick Gate.

The south front was the most ancient part of Newgate. Its architecture was of the same style as that of the inner ward of Alnwick Castle. The north front was intended as an outwork to the defences of the main gate, and had a gallery on each side, facilitating attack on assailants who had passed the first entrance. On this front were three ancient shields of arms, being St. George's cross; the arms of England, with the fleurs de lis semee; and those of Newcastle. In later timus there was above the south front a statue of James VI and I, placed under an arch, and having a crown and robes, a sceptre in the right hand, and a globe in the left.

By 1820, New Gate was "presented" at a Newcastle Assizes by the grand jury "as being out of repair and inconvenient, insufficient, and insecure." This led to the building of a new prison in Carliol Croft, to which the felons were gradually removed, whilst the debtors were transferred to the Castle. In June, 1823, workmen began to pull down the east wing of Newgate, which was followed by the removal of the west wing; and the north wing was then demolished. The most ancient part of the Gate still remained, and a vigorous effort was made to save it from destruction. It was proposed to form a carriage-road and footpath on each side of the old gateway, which was to be converted into halls for such incorporated companies as might need them. But the authorities would not hear of this. They wanted the old stones for the new prison; and so, in September 1823, part of the remaining walls were blown down with gunpowder. The rest were more easily removed. The portcullis was found in a perfect state; it was removed to Matthew White Ridley, 1st Viscount Ridley grounds at Blagdon Hall. During the demolition, several cannon-balls were found, deep sunk in the wall. 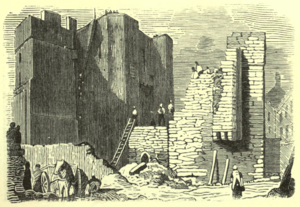 demolition of the New Gate in 1823

Whilst the work was going on, a jeu d'esprit was privately circulated, which attracted some notice.

All content from Kiddle encyclopedia articles (including the article images and facts) can be freely used under Attribution-ShareAlike license, unless stated otherwise. Cite this article:
New Gate, Newcastle Facts for Kids. Kiddle Encyclopedia.