The Castle, Newcastle facts for kids

The Castle, Newcastle is a medieval fortification in Newcastle upon Tyne, England, built on the site of the fortress which gave the City of Newcastle its name. The most prominent remaining structures on the site are the Castle Keep, the castle's main fortified stone tower, and the Black Gate, its fortified gatehouse.

Use of the site for defensive purposes dates from Roman times, when it housed a fort and settlement called Pons Aelius, guarding a bridge over the River Tyne. In 1080, a wooden motte and bailey style castle was built on the site of the Roman fort, which was the 'New Castle upon Tyne'. It was built by Robert Curthose, eldest son of William the Conqueror, having returned south from a campaign against Malcolm III of Scotland. The stone Castle Keep was built between 1172 and 1177 by Henry II on the site of Curthose's castle. The Black Gate was added between 1247 and 1250 by Henry III.

The site is in the centre of Newcastle, and lies to the east of Newcastle Central Station. The 75-foot (23 m) gap between the Keep and the Gatehouse is almost entirely filled by a railway viaduct, carrying the East Coast Main Line from Newcastle to Scotland. The Castle Keep and Black Gate pre-dated the construction of the Newcastle town wall, construction of which started sometime around 1265, and did not form part of it. Nothing remains of the Roman fort or the original motte and bailey castle. The Keep is a Grade I listed building, and a Scheduled Ancient Monument.

The Keep and Black Gate are now managed by the Old Newcastle Project under the Heart of the City Partnership as one combined visitor attraction, "Newcastle Castle".

In the mid-2nd century, the Romans built the first bridge to cross the River Tyne at the place where Newcastle now stands. The bridge was called Pons Aelius or ‘Bridge of Aelius’, Aelius being the family name of Emperor Hadrian, who was responsible for the Roman wall built along Tyne-Solway Gap. The Romans built a fort to protect the river crossing which was at the foot of the Tyne Gorge. The fort was situated on rocky outcrop overlooking the new bridge.

At some unknown time in the Anglo-Saxon age, the site of Newcastle came to be known as Monkchester. In the late 7th century, a cemetery was established on the site of the Roman castle.

In 1080, the Norman king, William I, sent his eldest son, Robert Curthose, north to defend the kingdom against the Scots. After his campaign, he moved to Monkchester and began the building of a ‘New Castle’. This was of the "motte-and-bailey" type of construction, a wooden tower on top of an earthen mound (motte), surrounded by a moat and wooden stockade (bailey).

In 1095, the Earl of Northumbria, Robert de Mowbray, rose up against William Rufus and Rufus sent an army north to crush the revolt and to capture the castle. From then on the castle became crown property and was an important base from which the king could control the northern barons. 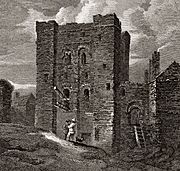 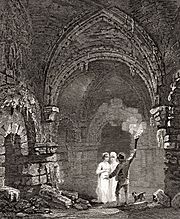 Not a trace of the tower or mound of the motte and bailey castle remains now. Henry II replaced it with a rectangular stone keep, which was built between 1172 and 1177 at a cost of £1,444. A stone bailey, in the form of a triangle, replaced the previous wooden one. The master mason or architect, Maurice, also built Dover Castle. The great outer gateway to the castle, called ‘the Black Gate’, was built later, between 1247 and 1250, in the reign of Henry III. During the civil wars at the end of King John's reign, it was under the control of Philip of Oldcoates.

Additional protection to the castle was provided late in the 13th century when stone walls were constructed, with towers, to enclose the town. Ironically, the safety provided by the town walls led to the neglect of the fabric of the castle. In 1589, during the reign of Queen Elizabeth the castle was described as being ruinous. From the early 17th century onward, this situation was made worse by the construction of shops and houses on much of the site.

In 1643, during the English Civil War, the Royalist Mayor of Newcastle, Sir John Marley, repaired the keep and probably also refortified the castle. In 1644 the Scottish army crossed the border in support of the Parliamentarians and the Scottish troops besieged Newcastle for three months until the garrison surrendered. The town walls were extensively damaged and the final forces to surrender on 19 October 1644 did so from the Castle keep.

During the 16th to the 18th century, the keep was used as a prison. By 1800, there were a large number of houses within the boundaries of the castle. 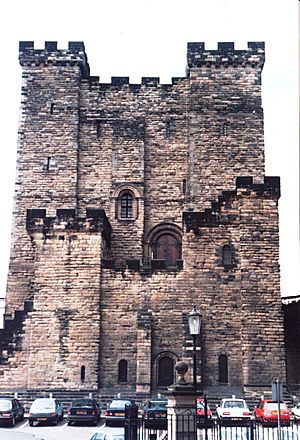 In 1809, Newcastle Corporation bought the keep and provided it with a roof and battlements. In addition the private dwellings within the castle boundaries were demolished. The keep was restored in 1810, 1812 and 1848. In the mid 19th century the arrival of the railway in Newcastle led to a viaduct to be constructed to the north of the keep and crossing the site of the castle. As a result, only the keep and the Black Gate now remain.

The keep was restored between the 1960s and 1980s when crumbling outside stonework was replaced and the interior cleaned. 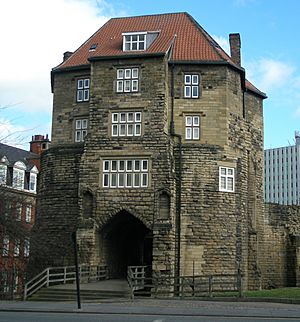 Blackgate from the front

The "Black Gate" was added to Newcastle Castle between 1247 and 1250, forming an additional barbican in front of the earlier north gate of the castle. It consisted of two towers with a passage running between them. On either side of the passage was a vaulted guardroom. There was a drawbridge at the front (facing west) and another at the rear. There was also a portcullis which could be raised and lowered to seal the entrance passage.

Eventually houses were built along both sides of the passageway, and one part of the building became a public house. By the early part of the nineteenth century, the Black Gate had become a slum tenement, housing up to sixty people.

Blackgate was leased to the Society of Antiquaries of Newcastle upon Tyne in the 1880s, which extensively restored it between 1883 and 1885. It was the Society that added the top floor and pitched roof. The Society has held regular meetings there ever since. The drawbridges to the front and rear have been replaced by wooden footbridges. 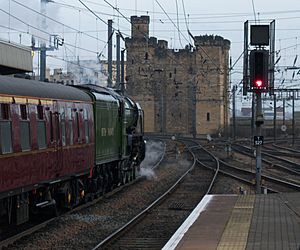 The keep as viewed from the Central Station island platform. Brand new steam locomotive 60163 Tornado stands to the left

The Keep is a Grade I listed building, and a Scheduled Ancient Monument. It is a roughly square building, measuring 62 feet (19 m) by 56 feet (17 m) and 81 feet (25 m) tall. The entrance leads via flights of stairs to the second floor and into the Great Hall, the largest room in the keep, measuring 30 feet (9.1 m) by 24 feet (7.3 m). The Black Gate was approached via a drawbridge across a moat. A wooden bridge has replaced the drawbridge. The original gate had a portcullis, and the recesses where this fitted can still be seen. The keep is currently owned by Newcastle City Council and managed by the Society of Antiquaries of Newcastle upon Tyne, one of the world's oldest antiquarian societies.

The Castle Keep can be visited today. The keep is also notable in having the main East Coast railway line running through the centre of the grounds. In particular, the battlements offer fine views over the River Tyne quayside, the cathedral and Newcastle Central station. The castle is reputedly haunted, and has been subject to many paranormal investigations. It featured in an episode of Most Haunted.

The Castle Keep and the Black Gate have recently been refurbished by the Heart of the City partnership and reopened on 21 March 2015 as Newcastle Castle. In addition to improved accessibility, new additions include an education centre, reception/gift shop and museum room in the Black Gate and audio-visual installations in the Castle Keep, telling the story of the site and the people who have lived there over the years.

All content from Kiddle encyclopedia articles (including the article images and facts) can be freely used under Attribution-ShareAlike license, unless stated otherwise. Cite this article:
The Castle, Newcastle Facts for Kids. Kiddle Encyclopedia.