The Cathedral Church of St Nicholas is a Church of England cathedral in Newcastle upon Tyne, England. It is the seat of the Bishop of Newcastle and is the mother church of the Diocese of Newcastle, the most northerly diocese of the Anglican Church in England, which reaches from the River Tyne as far north as Berwick-upon-Tweed and as far west as Alston in Cumbria.

Founded in 1091 during the same period as the nearby castle, the Norman church was destroyed by fire in 1216 and the current building was completed in 1350, so is mostly of the Perpendicular style of the 14th century. Its tower is noted for its 15th-century lantern spire. Heavily restored in 1777, the building was raised to cathedral status in 1882, when it became known as the Cathedral Church of St Nicholas. 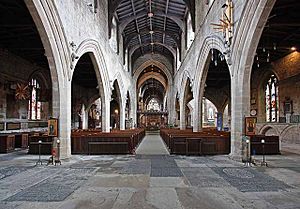 Looking down the nave towards the East Window.

The cathedral is named after St Nicholas, the patron saint of sailors and boats. This may reflect the cathedral's position on the northern heights above the River Tyne. It was originally a parish church, built in 1091. It was built close to the line of Hadrian's Wall through Newcastle, which may have passed through the churchyard, but unfortunately the exact location of its line through the very centre of the city is currently lost. Close to the south of the cathedral is Newcastle Castle, which gave the city its name, and which was itself built on the site of the Hadrian's Wall fort of Pons Aelius. The Norman church was destroyed by fire in 1216 and the present structure was completed in 1350.

The most famous incumbent of the cathedral was the Scottish reformer John Knox, who served as minister from late 1550 until 2 February, 1553.

In the mid-19th century Newcastle experienced a huge increase in its population, leading to the construction of over 20 new churches in the suburbs. As Newcastle continued to grow, so did its need for a diocese separate from Durham, and so in 1882 the Diocese of Newcastle was formed, with St Nicholas’s as its cathedral. With this, Newcastle was designated a City in the same year.

On each corner of the lantern are gilded statues, of Adam eating the apple, Eve holding out the apple, Aaron is dressed as a Bishop, and David holds a harp. Following work on the street in the 1860s the tower was found to be cracking and tilting, so two porches were added to buttress the structure. Since then the tower has settled and the ornate wooden font cover, which is suspended from the tower inside, does not hang in line with the font.

The interior of the church was badly damaged by Scottish invaders during their brief occupation of the city in 1640, and in 1644, during a nine-week siege, Scottish invaders threatened to bombard the lantern tower, but were deterred when the mayor Sir John Marley put his Scottish prisoners in it. The tower was repaired in September 1645, 1723 and 1761. A lightning conductor was added in 1777.

The tower contains a complete ring of twelve bells, the tenor bell which weighs almost two tons, plus three 15th-century bells, one of which, "St Nicholas", is rung for daily services. The addition of a second treble bell (named "Gabriel") in 1999 has made it possible to ring a lighter peal of ten bells. Newcastle Cathedral is the second tallest religious building in Newcastle and the sixth tallest structure in the city overall. 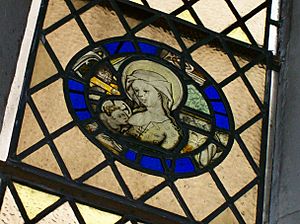 The nave furnishings were designed by the local artist and craftsman Ralph Hedley in the early 20th century, after the parish church of St Nicholas became a cathedral in 1882. The high altar depicts Christ in Majesty holding an orb and sceptre, flanked by the Four Evangelists each with their special symbol.

Inside the cathedral a finely-carved marble monument commemorates Admiral Lord Collingwood (1748–1810), who took over command at the Battle of Trafalgar (21 October 1805) after the death of Admiral Lord Nelson. He was baptised and married in St Nicholas's and each year, on 21 October, a wreath is laid in his memory in front of the monument.

The cathedral is filled with beautiful stained glass. Much of the original glass was broken during the Civil War and most now dates from the 18th century onwards. St Margaret's Chapel contains the only known fragment of medieval stained glass in the cathedral, a beautiful roundel of the Madonna feeding the Christ Child. More-modern stained glass works such as in St. George’s Chapel were erected in honour of two of Tyneside’s late 19th-/early 20th-century industrial pioneers, who both died in 1931 within weeks of each other. Other references to industry can be found in the cathedral's stained glass, including in the Charles Parsons' window, which features Turbinia, the first turbine-driven steam yacht, with which Parsons astonished the Queen’s Navy at the Spithead naval review in 1897.

The cathedral contains a number of memorials, the oldest being a 13th-century effigy of an unknown knight, probably a member of the household of Edward I. It is one of the oldest objects in the cathedral. Another celebrates Admiral Lord Collingwood, a hero of the Battle of Trafalgar, who was baptised and married in the cathedral. Another is the "Thornton Brass", a memorial to Roger Thornton, who was a successful merchant, three times Mayor of Newcastle, several times Member of Parliament, and great benefactor to the cathedral. This is one of the finest examples of a Flemish brass and dates from at least as early as 1441 (may be pre-1429); it is believed to be the largest brass in the United Kingdom, and originally it covered Thornton's tomb in the nearby All Saints' Church, Newcastle upon Tyne. This commemoration to Thornton, his wife, seven sons and seven daughters can be seen fixed vertically behind the High Altar. A horizontal replica is kept near the north door of the cathedral for brass rubbing purposes.

Just to the north of the cathedral stands a bronze statue of Queen Victoria erected to commemorate 500 years of the Shrievalty (the jurisdiction of a sheriff) of Newcastle. Sculpted by Alfred Gilbert and unveiled in 1903, two years after Queen Victoria’s death, the statue was a gift from W. H. Stephenson, a company director and politician who held the office of mayor in Newcastle seven times. 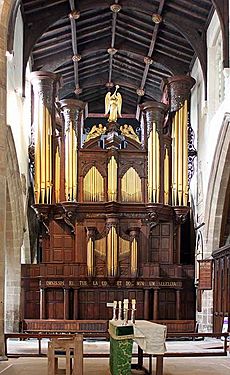 The cathedral has a strong tradition of music. In 1503, Princess Margaret, daughter of Henry VII and engaged to marry James IV of Scotland, passed through Newcastle, noting in her journal a number of children in surplices "who sang melodious hymns, accompanying themselves with instruments of many sorts". Later, the baroque composer Charles Avison (1709–1770) was organist and choirmaster at the church.

The cathedral choir has been featured on BBC Radio 3's Choral Evensong, performed with the Northern Sinfonia at The Sage Gateshead and sung in concert with the Mediæval Bæbes. They have also recorded a number of CDs.

The cathedral is home to a fine organ, a four-manual Grand Organ built by T C Lewis, although rebuilt several times since, notably by Harrison & Harrison in 1911 and 1954 and currently by Nicholson & Co. of Worcester. This organ has been out of action since 2013 due to its deteriorating mechanics.

All content from Kiddle encyclopedia articles (including the article images and facts) can be freely used under Attribution-ShareAlike license, unless stated otherwise. Cite this article:
Newcastle Cathedral Facts for Kids. Kiddle Encyclopedia.