Turbinia was the first steam turbine-powered steamship. Built as an experimental vessel in 1894, and easily the fastest ship in the world at that time, Turbinia was demonstrated dramatically at the Spithead Navy Review in 1897 and set the standard for the next generation of steamships, the majority of which would be turbine powered. The vessel is currently located at the Discovery Museum in Newcastle upon Tyne, North East England, while her original powerplant is located at the Science Museum in London.

Turbinia at the Spithead Navy Review, 1897.

Parsons' ship turned up unannounced at the Navy Review for the Diamond Jubilee of Queen Victoria at Spithead, on 26 June 1897, in front of the Prince of Wales, foreign dignitaries, and Lords of the Admiralty. As an audacious publicity stunt, Turbinia, which was much faster than any ship at the time, raced between the two lines of navy ships and steamed up and down in front of the crowd and princes, while easily evading a navy picket boat that tried to pursue her, almost swamping it with her wake.

Photographer and cinematographer Alfred J. West took several photographs of Turbinia traveling at full speed at the review. He was subsequently invited by Sir Charles Parsons to film and photograph the vessel within the River Tyne and the adjacent North Sea; the pictures captured remain the defining image of Turbinia at speed. 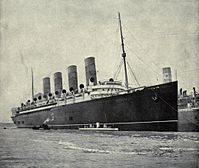 From this clear demonstration of her speed and power and after further high speed trials attended by the Admiralty, Parsons set up the Turbinia Works at Wallsend, which then constructed the engines for two prototype turbine-powered destroyers for the Navy, HMS Viper and HMS Cobra, that were launched in 1899. Both vessels were lost to accidents in 1901, but although their losses slowed the introduction of turbines, the Admiralty had been convinced. In 1900, Turbinia steamed to Paris and was shown to French officials, and then displayed at the Paris Exhibition.

As a museum ship

The company decided to slow down the deterioration of Turbinia by lifting her out of the water in 1908, and in 1926, the directors of the Parsons Marine Steam Turbine Company offered the ship to the Science Museum, London. Turbinia was cut in two and the aft section, complete with engines and propellers, was put on display in the South Kensington museum in London, which did not have the space to accommodate the full ship. The fore section was presented in 1944 to Newcastle Corporation, and placed on display in the city's Exhibition Park. In 1959, the Science Museum took the aft section of Turbinia off display, and by 1961, using a reconstructed centre section, Turbinia was once more complete and on display in the Newcastle Municipal Museum of Science and Industry. In 1983, a complete reconstruction was undertaken.

On 30 October 1994, 100 years after her launch, Turbinia was moved to Newcastle's Museum of Science and Engineering (later renamed the Discovery Museum) and put on display to the public in March 1996. Listed as part of the National Historic Fleet, in 2000, the vessel was the focal point of a year-long, £10.7 million redevelopment programme at the Discovery Museum. The gallery around Turbinia was the first area to be refurbished, with the main part of the work involving raising the roof by one storey to create viewing galleries on three levels.

All content from Kiddle encyclopedia articles (including the article images and facts) can be freely used under Attribution-ShareAlike license, unless stated otherwise. Cite this article:
Turbinia Facts for Kids. Kiddle Encyclopedia.