The Cathedral Church of Christ the King, also called Christ Church Cathedral, is an Australian cathedral in Newcastle, New South Wales. It is the cathedral church of the Diocese of Newcastle in the Anglican Church of Australia. The building, designed by John Horbury Hunt in the Gothic Revival style, is located on a hill at the city's eastern end in the suburb called The Hill. It was added to the New South Wales State Heritage Register on 28 June 2011.

The current dean, the Very Reverend Katherine Bowyer (former rector of the Parish of Cardiff), was installed on 4 October 2017. She is the first woman to hold the position. 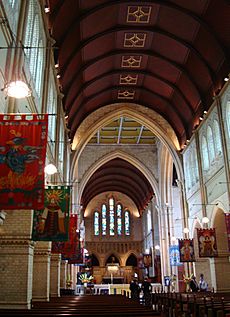 The present cathedral replaced an earlier Christ Church, built in 1817. When the Diocese of Newcastle was created in 1847, the original Christ Church became a cathedral and William Tyrell was appointed first Bishop of Newcastle (1848–79). Due to the poor condition of the original building and the growing population of the city, it was decided to build a new cathedral and a design competition was held in 1868. It was won by architects Terry and Speechley from Melbourne, but they had seriously underestimated the cost of their design and accordingly the plans of John Horbury Hunt were adopted instead. His design was for a cruciform Victorian Gothic style building with a central tower and spire over the central crossing. Work started in 1883 and the older building was demolished the following year. A temporary building was constructed nearby for services until the new cathedral could be completed and consecrated in 1902. The tower was not added until 1979, minus the planned spire. The building was damaged during an earthquake in 1989 and since been repaired.

In 1969, the cathedral witnessed the Australian premiere of Benjamin Britten's Noye's Fludde (Noah's Flood). The "voice of God" was provided by Brin Newton-John, father of singer Olivia Newton-John.

All content from Kiddle encyclopedia articles (including the article images and facts) can be freely used under Attribution-ShareAlike license, unless stated otherwise. Cite this article:
Christ Church Cathedral, Newcastle Facts for Kids. Kiddle Encyclopedia.