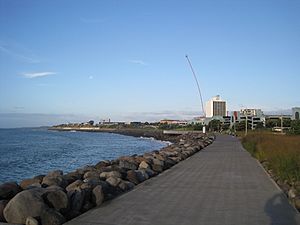 The Coastal Walkway is a 12.7-kilometre (7.9 mi) long walkway located along the coast of New Plymouth, New Zealand. The walkway stretches from near Port Taranaki, past the central city, through Hickford Park, past Bell Block Beach and to Tiromoana Crescent in Bell Block, north-east of New Plymouth. The walkway runs through a number of bridges, most notably, the Te Rewa Rewa Bridge.

The Coastal Walkway is a foreshoreway constructed in 1999, along with the Wind Wand, originally as a 7-kilometre (4.3 mi) long walkway. In 2010, extensions were made to the walkway and an additional 3 kilometres were added, extending to Bell Block. The development was part of a joint programme by NPDC and NZTA to encourage and enable people to use active transport instead of motor vehicles. In 2014, the walkway was extended to Tiromoana Crescent in Bell Block bringing the length to 12.7km. In 2016, the walkway was extended with the Mangati Pathway, linking the coastal route across Bell Block along the Mangati Reserve to SH3.

The walkway has received numerous awards,

All content from Kiddle encyclopedia articles (including the article images and facts) can be freely used under Attribution-ShareAlike license, unless stated otherwise. Cite this article:
New Plymouth Coastal Walkway Facts for Kids. Kiddle Encyclopedia.