Port Taranaki is a port complex located in New Plymouth, New Zealand. It is the only deep water port on the west coast of New Zealand, and is owned by the Taranaki Regional Council. The port handles a wide range of coastal and international cargoes, mostly relating to the farming, engineering and petrochemical industries. Shipping volumes decreased significantly over the period 2012 to 2015. 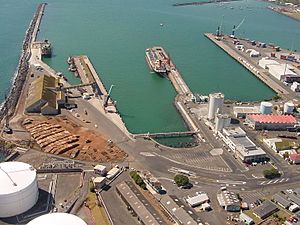 The port was established in 1875, and construction of the main breakwater began in 1881 with Frederic Carrington ceremoniously laying the first stone.

In 2007, Port Taranaki became the first port in New Zealand to receive official recognition for its harbour safety management systems.

In 2013, the port purchased most of the site of the decommissioned New Plymouth Power Station. This site is adjacent to the port and provided an additional 18 ha of land.

In 2016, the port became the first port in New Zealand to be smoke free. 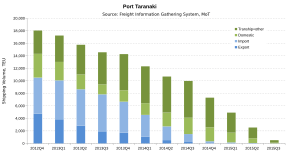 All content from Kiddle encyclopedia articles (including the article images and facts) can be freely used under Attribution-ShareAlike license, unless stated otherwise. Cite this article:
Port Taranaki Facts for Kids. Kiddle Encyclopedia.