Te Rewa Rewa Bridge is a pedestrian and cycleway bridge across the Waiwhakaiho River at New Plymouth in New Zealand. Its spectacular shape and setting make it a popular landmark.

The bridge is part of the northern extension to the Coastal Walkway, connecting New Plymouth with Bell Block. The extension was made possible by a special agreement between Ngāti Tawhirikura hapū and the New Plymouth District Council. A historic pā is located on the north river bank and this was the site of a battle during the Musket Wars; the site is a burial ground (Rewa Rewa). The bridge is located in a semi-rural area. 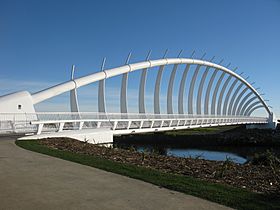 The designer, Peter Mulqueen, is quoted as saying he understood that the bridge should "touch lightly" on the Rewa Rewa side of the river, in order to honour the deceased. This ruled out heavier designs like cable stays and angular truss structures. Mulqueen wanted to achieve a bridge with a "harmonious and dignified character".

With the ribs yielding to the prevailing wind, the bridge is aligned to Mount Taranaki. The sacred mountain is framed within the skewed arch when viewed while leaving the sacred ground – promising what is eternal.

The 68.8 metres (226 ft) bridge is designed to accommodate an ambulance and other service vehicles. It is made of three steel tubes; two beneath the deck and the remaining one, together with 19 ribs, forming a distinctive arch. 85 t of fabrication steel, 62 t of reinforcing steel and 550 m3 (19,000 cu ft) of concrete have been used for its construction. The bridge deck has been placed at 4.5 metres (15 ft) above normal flow level to withstand both floods and lahars from volcanic eruptions.

A major challenge was to transport the 85 metres (279 ft) long and 85 t superstructure onto the site, including across a private golf course. River contamination and disturbance was to be avoided, so no temporary piers were used.

The bridge was officially opened on 5 June 2010. In July 2010, its first full month of operation, the bridge was used by 55,756 cyclists and pedestrians.

All content from Kiddle encyclopedia articles (including the article images and facts) can be freely used under Attribution-ShareAlike license, unless stated otherwise. Cite this article:
Te Rewa Rewa Bridge Facts for Kids. Kiddle Encyclopedia.