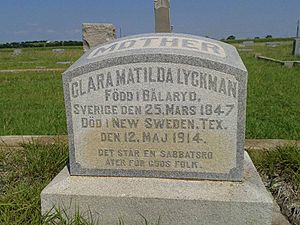 A gravestone written in Swedish at the Lutheran cemetery in New Sweden, Texas.

The community was established in 1873 and was known then as Knight's Ranch. The first pioneers of this settlement, with a few exceptions, came from the historic Swedish province of Småland. The Swedish Evangelical Lutheran Congregation was established on February 23, 1876 and carried the name Manor until 1887 when it was renamed New Sweden. With the establishment of the New Sweden Lutheran Church, the community itself became known as New Sweden. A cotton gin began operation at New Sweden in 1882, and a post office opened in 1887.

All content from Kiddle encyclopedia articles (including the article images and facts) can be freely used under Attribution-ShareAlike license, unless stated otherwise. Cite this article:
New Sweden, Texas Facts for Kids. Kiddle Encyclopedia.