The New Zealand fernbird or simply fernbird (Poodytes punctatus) is an insectivorous bird endemic to New Zealand. In the Māori language, it is named kōtātā or mātātā.

The New Zealand fernbird was described by the French zoologists Jean Quoy and Joseph Gaimard in 1832 from a specimen collected in Tasman Bay / Te Tai-o-Aorere, South Island, New Zealand. They coined the binomial name, Synallaxis punctata.

There are five subspecies:

The related Chatham fernbird (Poodytes rufescens), which, became extinct around 1900, was sometimes treated as a subspecies of this species.

The New Zealand fernbird is a rich brown above and white below, with brown spots on both the throat and breast. Early settlers called it the "swamp sparrow" no doubt because of its colouration. The tail feathers are thin, dark brown, and spine-like. The birds reach a length of 18 cm (7 in) – as measured from tip of beak to end of tail. However, almost half of that is tail. 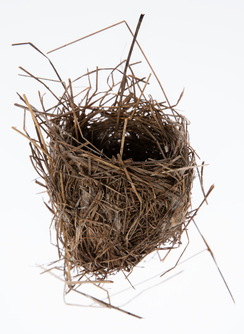 New Zealand fernbird nest from the collection of Auckland Museum

The New Zealand fernbird is a ground-dwelling bird, and is a reluctant flier, travelling mainly on foot or in occasional short flights of less than 15 metres. In the 19th century, Buller described it as "one of our most common" (birds) but it has been adversely affected by the subsequent widespread destruction of its natural wetland habitat following European settlement and is now rare.

The birds nest in sedges or other vegetation close to the ground, making a deep woven cup of dried rushes lined with feathers. Breeding occurs from September to February, producing clutches of 2-3 pinkish-white eggs with brown or purple speckles. The Māori phrase "te whare o te mātātā" (a fernbird's house) describes a woven flax cape, made to keep out the weather; a testament to the design and strength of the nest.

Māori revered the fernbird as an "oracle" or "wise bird" (Manu tohu). The calls of the bird were interpreted as heralding success or failure in daily activities such as fishing but on a more serious level could also portend prosperity and health or disaster and death.

All content from Kiddle encyclopedia articles (including the article images and facts) can be freely used under Attribution-ShareAlike license, unless stated otherwise. Cite this article:
New Zealand fernbird Facts for Kids. Kiddle Encyclopedia.