The Newfoundland wolf (Canis lupus beothucus) was a subspecies of grey wolf that was native to Newfoundland.

It was described as being a medium-sized, slender-skulled wolf with a white pelt, though melanists also occurred. In comparison to its mainland relatives it bears a striking difference in its internal accessory cusp angles allowing for distinction between subspecies. The last specimen was reportedly killed in 1911. 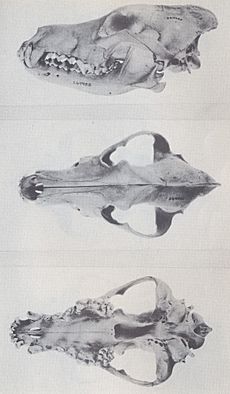 This wolf is recognized as a subspecies of Canis lupus in the taxonomic authority Mammal Species of the World (2005). In 1912, Gerrit S. Miller Jr have concluded that in North America, specifically west of the Mississippi River and Hudson Bay, and north of the Platte and Columbia rivers, there are three types of wolves: timber-wolf, plains-wolf, and tundra-wolf.

All content from Kiddle encyclopedia articles (including the article images and facts) can be freely used under Attribution-ShareAlike license, unless stated otherwise. Cite this article:
Newfoundland wolf Facts for Kids. Kiddle Encyclopedia.