Nezumi no Sumō facts for kids

Nezumi no Sumō (ねずみのすもう or ねずみの相撲code: ja is deprecated , lit. "Rat's/Mouse's Sumo") is a Japanese folk tale. It tells the story of an old man and his wife who help out some mice who engage in sumo. As a reward, one of the mice gives them enough gold on which to live for the rest of their lives.

Studio Ghibli released a 13-minute short film in 2010 titled Chūzumō based on this folk tale. The film shows at the Ghibli Museum in Mitaka.

The story focuses on an old couple living at the base of a mountain. One day, the old man heads up the mountain in order to cut some firewood. While performing this task, he hears a chorus of strange voices chanting. Thinking this is mysterious, the old man follows the chant through the thicket until he comes to the middle of the woods, where - in the middle of a clearing - a sumo ring has been set up. In this ring, a slender mouse and a much larger mouse are locked in a sumo match. The old man, fascinated, watches the match intently, and he suddenly realises that the slender mouse is one which lives in his house, while the fatter mouse lives in the house of a local rich man. He cheers the slender mouse on, but due to its weakness and small stature it is quickly flung out of the ring by the larger mouse, much to the man's dismay.

Returning home after the match, the old man tearfully tells his wife of the sumo match, lamenting the fact that he has no delicious food to offer to the mouse in order to build its strength. His wife, touched by the story, decides that the two together would take the rice they had saved for New Year and make some rice cakes for the mouse. They leave the rice cakes on a shelf for the mouse to find, and come morning find they have been taken. The old couple are satisfied by this, confident that the rice cakes will have added to the mouse's power.

The old man hurries back down the mountain to tell his wife of what he witnessed, and she replies that they should take all of their rice and make rice cakes for the rodents, adding hopefully that they can make do without the rice until the new year. In addition to the rice cakes, the old woman leaves out two loincloths for the mice. Upon waking the next morning, the old couple find both the rice cakes and the loincloths absent, and the old man excitedly prepares to go up the mountain to witness the next sumo match. Before he leaves, he notices three gold coins in the corner of the room. Surprised, he calls his wife and tells her they must have been left by the mouse from the rich man's house.

The old couple set off together to cut firewood and once again the strange chanting can be heard. The two hurry to the clearing to watch the match, and see two fine, healthy mice in red loincloths grappling. The match goes on for a long time, with both mice being too strong to be toppled by the other. The old couple watch the match continue until evening, and then return home content that they have done a good deed. With the money left by the rich man's mouse, the two live happily ever after. 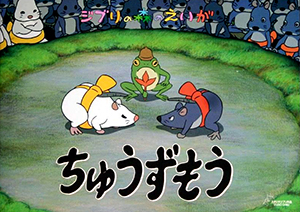 Hayao Miyazaki wrote a 13-minute fantasy animated short film, Chūzumō, in 2010. It was produced by Studio Ghibli for the Ghibli Museum in Mitaka. The film was directed by Akihiko Yamashita.

An old farmer discovers a group of rats heading to a sumo wrestling bout. After they lose miserably, he decides to feed the rats to boost their chances of winning.

All content from Kiddle encyclopedia articles (including the article images and facts) can be freely used under Attribution-ShareAlike license, unless stated otherwise. Cite this article:
Nezumi no Sumō Facts for Kids. Kiddle Encyclopedia.