Nine Wells is a 1.2 hectare Local Nature Reserve east of Trumpington, on the southern outskirts of Cambridge. It is owned and managed by Cambridge City Council.

The site is a small area of woodland surrounded by agricultural land. Multiple springs issue from the base of a chalk hill, and feed Hobson's Conduit, the watercourse that was built between 1610 and 1614 by Thomas Hobson and other benefactors to bring fresh water into the city of Cambridge. There are four main springheads linked by stream channels, as well as innumerable minor fissures, that issue water at a constant 10.2 °C. 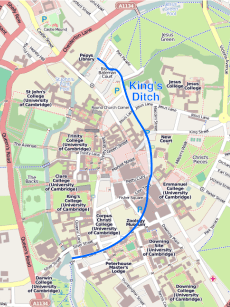 Location of King's Ditch overlaid on a modern map

In 1265 a defensive channel known as 'the king's ditch' was excavated around the city of Cambridge. By the early 17th century this ditch had become an open sewer. In 1574 Andrew Perne DD, Master of Peterhouse, thought of constructing a channel to bring water to the ditch. Hobson's Conduit, constructed from 1610, used the natural springs at Nine Wells to create a flow of water to the city and flush the kings ditch. This was not only successful in sanitising the city but it became the principal water supply for Cambridge for over 250 years. Water continues to flow into the city and waters the lake in the Botanic Gardens. 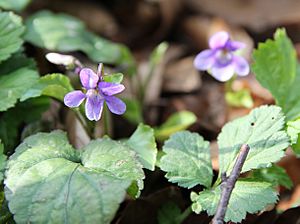 The dominant trees here are beech which were originally planted for firewood but have a detrimental effect on the watercourses: an acidic acid leaf fall in autumn is causing heavy silting and a change in oxygen levels. The hedgerow that encloses the reserve was planted following the Enclosures Act of 1834 and comprises native species like hawthorn, spindle and field maple. A survey determined that 108 plant species grow here and the area contains numerous mature ash trees as well as blackthorn. Scented sweet violets (Viola odorata) and bluebells bloom there early in the year, and later there are cowslips and deadly nightshade.

It was created a biological Site of Special Scientific Interest because a range of relic aquatic invertebrates bred here. The flatworms Planaria cornuta and P. alpina were found here and had survived from the last glacial period. Another relic species was a trichopteran (caddisfly), Agapetus fuscipes. However the drought of 1976 together with increased water abstraction caused some extinctions and Nine Wells lost its SSSI status. Efforts are being made to recreate conditions favourable to re-establishing a richer invertebrate fauna again, however there is a great deal of new building going on in the area so this special little habitat patch is potentially under threat. According to the information boards within the reserve, active management is needed to keep the streams suitable for bullhead fish to thrive and this is important as they provide food for kingfishers. Falling beech leaves need to be cleared from the streams to stop the water from becoming too acidic.

These woods are home to species including chaffinch, robin, yellowhammer, greenfinch, blackbird and, during the summer, chiffchaff. The site is an important refuge for birds, with sparrowhawk (Accipitier nisus), green woodpecker (Picus viridis), long-tailed tit (Aegithalos caudatus), bullfinch (Pyrrhula pyrrhula) and redwing (Turdus iliacus) recorded as well as a good variety of small species. This is also a good site for butterflies including peacocks and brimstones (Gonepteryx)".

Within the Reserve there is a monument to Hobson's Conduit which was erected in 1861 by public subscription and records the benefactors to the water course and conduit as:

All content from Kiddle encyclopedia articles (including the article images and facts) can be freely used under Attribution-ShareAlike license, unless stated otherwise. Cite this article:
Nine Wells Facts for Kids. Kiddle Encyclopedia.