Nintendo Vs. System facts for kids 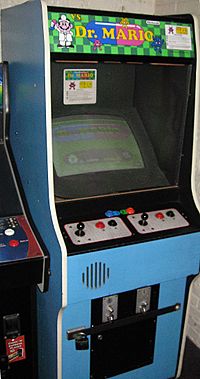 A Vs. Dr. Mario arcade machine

The Nintendo Vs. System is a series of arcade ports of Nintendo Entertainment System home video games made by Nintendo. It was released in the late 1980s. The games are designed for two-player multiplayer. Some of the games were different from their NES versions. For example, Vs. Super Mario Bros. was more difficult, having levels from the Japanese Super Mario Bros. 2 along with the Super Mario Bros. levels. Others, such as Vs. Duck Hunt, had better graphics.

All content from Kiddle encyclopedia articles (including the article images and facts) can be freely used under Attribution-ShareAlike license, unless stated otherwise. Cite this article:
Nintendo Vs. System Facts for Kids. Kiddle Encyclopedia.