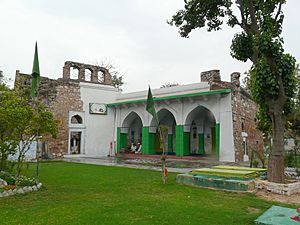 Hazrat Shaikh Khwaja Syed Muhammad Nizamuddin Auliya (1238 – 3 April 1325), also known as Hazrat Nizamuddin, was a famous Sufi saint of the Chishti Order in India. His shrine is in old Delhi and is one of the more important Chishti shrines in all South Asia.

All content from Kiddle encyclopedia articles (including the article images and facts) can be freely used under Attribution-ShareAlike license, unless stated otherwise. Cite this article:
Nizam-ud-din Auliya Facts for Kids. Kiddle Encyclopedia.