The Noire River is a tributary of the North-West shore of Saint Lawrence River flowing north-east of La Malbaie, in the municipality of Saint-Siméon, in Charlevoix-Est Regional County Municipality, in Quebec, in Canada.

The lower portion of this valley is served by Route 138 which runs along the shoreline of the St. Lawrence River. Route 170 which links Saint-Siméon to Petit-Saguenay village serves the lower and middle parts of this valley. The upper part of the valley has some secondary forest roads for forestry and recreation purposes.

Forestry is the first economic activity in the sector; recreational tourism activities, second.

The surface of the Black River is usually frozen from early December to late March, however, safe ice movement is generally from mid-December to mid-March. 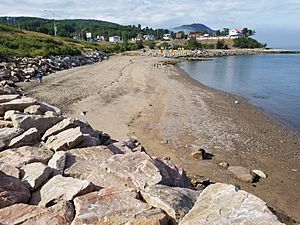 View of the bay from the stone embankment at the mouth of the Noire River, on the side North of the village of Saint-Siméon.

The main hydrographic slopes near the Noire River are:

From its source (lac à l'Ours), the course of the Noire River descends on 43.9 km (27.3 mi) according to the following segments:

The toponym "rivière Noire" was formalized on December 5, 1968 at the Bank of place names of the Commission de toponymie du Quebec.

All content from Kiddle encyclopedia articles (including the article images and facts) can be freely used under Attribution-ShareAlike license, unless stated otherwise. Cite this article:
Noire River (Charlevoix) Facts for Kids. Kiddle Encyclopedia.