Non-vascular plants is a general term for those plants without a vascular system (xylem and phloem). Although non-vascular plants do not have these tissues, some of them have other tissues for internal transport of water.

Nonvascular plants have no roots, stems, or leaves. These structures always have some vascular tissue.

In the past, the term non-vascular plant included all the algae, but also the fungi as well. Today, it is recognized that these groups are not closely related to plants, and have a very different biology. 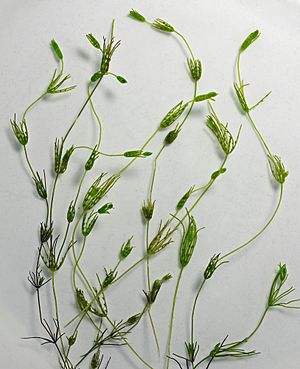 Algae are a type of non-vascular plant.

All content from Kiddle encyclopedia articles (including the article images and facts) can be freely used under Attribution-ShareAlike license, unless stated otherwise. Cite this article:
Non-vascular plant Facts for Kids. Kiddle Encyclopedia.