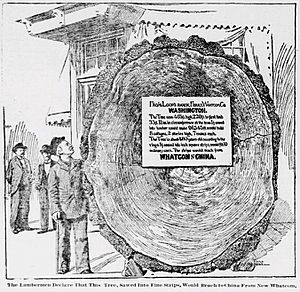 Nooksack Giant depicted after felling, in The Morning Times, February 28, 1897

The Nooksack Giant was a superlative Coast Douglas-fir (Pseudotsuga menziesii var. menziesii) that grew at Loop's Ranch (now Alpenglow Farm) in Maple Falls in Washington State. It was felled in the 1890s. The tree was measured with a tape after felling at 465 feet (142 m) tall, and 34 feet (10 m) in circumference. It produced more than 96,000 board feet of lumber. The New York Times regarded the tree in a March 7, 1897 issue as the "most magnificent fir tree ever beheld by human eyes" and called its destruction a "truly pitiable tale" and a "crime". The Morning Times of February 28, 1897 claimed that the wood, sawed into one-inch strips, would reach from "Whatcom [the tree's location] to China".

All content from Kiddle encyclopedia articles (including the article images and facts) can be freely used under Attribution-ShareAlike license, unless stated otherwise. Cite this article:
Nooksack Giant Facts for Kids. Kiddle Encyclopedia.