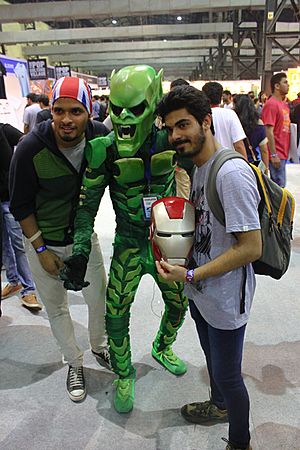 A cosplayer dressed up in a Raimi style of the Green Goblin.

The Green Goblin is the main villain of the 2002 Sam Raimi Spider-Man movie and based on the Marvel Comics character of the same name. He was played by Willem Dafoe in all three movies and the first tie-in video game.

The designers wanted a more comic-accurate design for his suit, but many considered it too scary.

Norman Osborn is the CEO of OSCORP and father of Harry Obsorn.

Willem Dafoe's portrayal has been well-liked and considered one of the best movie supervillains of all time despite his design.

All content from Kiddle encyclopedia articles (including the article images and facts) can be freely used under Attribution-ShareAlike license, unless stated otherwise. Cite this article:
Norman Osborn (Sam Raimi movie series) Facts for Kids. Kiddle Encyclopedia.