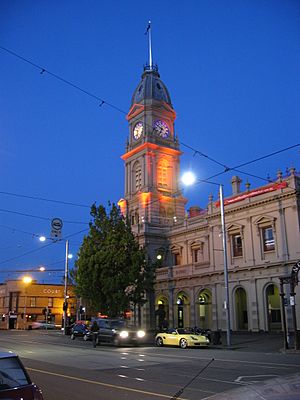 North Melbourne Town Hall is the former town hall of the Town of Hotham (later renamed North Melbourne) in Victoria, Australia. It is listed in the register of the National Trust (file no. B2388)

It has been under the jurisdiction of the City of Melbourne since 1905 and is currently used as an "Arts House".

It is located on the corner of Errol and Queensberry Streets.

The Town Hall, built in 1876, was designed by Architect George Raymond Johnson, in the Italianate with Second Empire elements style of Victorian architecture. He also designed the Collingwood, Daylesford, Fitzroy, Kilmore, Maryborough and Northcote Town Halls.

A cast-iron drinking fountain, donated by Hotham mayor, Thomas Henderson, on the footpath nearby the hall features an ornamental kangaroo and is registered by the National Trust of Victoria.

All content from Kiddle encyclopedia articles (including the article images and facts) can be freely used under Attribution-ShareAlike license, unless stated otherwise. Cite this article:
North Melbourne Town Hall Facts for Kids. Kiddle Encyclopedia.