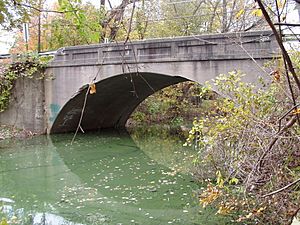 The bridge was built by the Michigan State Highway Department in 1916 according to one of their standard plans; however, the specific plans for this bridge are thought not to have survived. W. B. Rogers served as contractor, and was paid $5,269 for building the bridge. According to the bridge plates, it was originally designated Trunk Line Bridge No. 57. A photograph of the bridge taken after the completion of construction was published in 1916 in the Sixth Biennial Report of the highway department.

The bridge was eligible for inclusion on the National Register of Historic Places under Criterion C, and was listed on December 17, 1999. Two other bridges in Berrien County, the Avery Road–Galien River Bridge and the Blossomland Bridge, were added the same day.

The bridge was located north of Watervliet city limits at the east end of Paw Paw Lake where it empties into the Paw Paw River. The bridge was a reinforced concrete, barrel vaulted arch bridge. It was 45 feet (14 m) long and spanned 40 feet (12 m). The parapet railings were constructed of solid concrete and had six recesses on each side. At the corners of the railings were Armco guard rails. There were identical bridge plates located at the north and south corners.