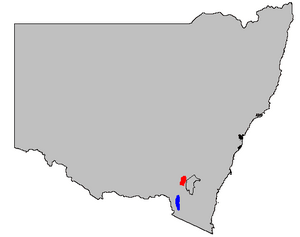 The northern corroboree frogs live in the red area, the Southern Corroboree Frogs in the blue area

The two frogs were believed to be the same. But in 1996 they were recognised as two different species. The northern corroboree frog is a very small black frog with either light green or yellow stripes. Unlike the southern species, these stripes are sometimes broken.

It lives in the subalpine areas of south eastern Australia, an area of about 550 km2 (212 sq mi) including the Kosciusko National Park, Namadgi National Park, the Brindabella Mountains and the Fiery Ranges.

The northern corroboree frog has not suffered as badly as the southern as it has a much larger habitat. It lives above 1,000 m (3,281 ft)above sea level and with higher population numbers at the lower level. It has recently been downgraded from critical to an endangered species by the International Union for the Conservation of Nature (IUCN).

All content from Kiddle encyclopedia articles (including the article images and facts) can be freely used under Attribution-ShareAlike license, unless stated otherwise. Cite this article:
Northern corroboree frog Facts for Kids. Kiddle Encyclopedia.