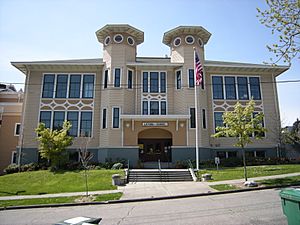 Northlake is a neighborhood in Seattle, Washington, that consists of the southern part of Wallingford, below N 40th Street. It is so named for being on the northern shore of Lake Union. Landmarks are Gas Works Park, with the Wallingford Steps above, and Ivar's Salmon House. Circa 1900, the eastern part of Northlake was known as Latona, and the John Stanford International School building was formerly the Latona School. Nowadays, the name Latona is likely to refer to anywhere along Latona Ave. NE from Northlake north to NE 65th St. near Green Lake.

All content from Kiddle encyclopedia articles (including the article images and facts) can be freely used under Attribution-ShareAlike license, unless stated otherwise. Cite this article:
Northlake, Seattle Facts for Kids. Kiddle Encyclopedia.