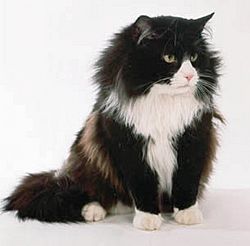 The Norwegian Forest cat is a breed of domestic cat found in Northern Europe.

This breed is adapted to a very cold climate. It has a double coat. The top coat is glossy, long, water-shedding hairs. It also has a woolly undercoat for insulation.

The breed's ancestors may have been brought to Norway by the Vikings. During World War II, the breed became nearly extinct. A Norwegian cat club helped the breed. They created an official breeding program. It was registered as a breed with the European Fédération Internationale Féline in the 1970s. This was when a local cat fancier, Carl-Fredrik Nordane, took notice of the breed. He made efforts to register it. 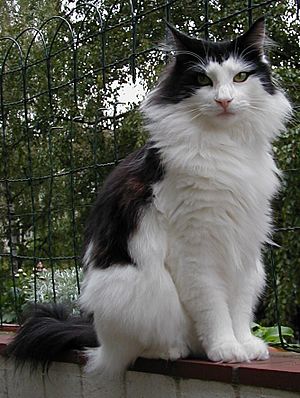 The Norwegian Forest Cat is strongly built and larger than an average cat. Adult females of the species will typically weigh 3.6 - 8 kg (8 - 18 lbs), while males tends to weigh 4.5 to 9 kg (10 - 20 lbs) . The breed has a long, sturdy body, long legs and a bushy tail. The coat consists of a long, glossy, thick and water-repellent top layer and a woolly undercoat and is thickest at the legs, chest and head. The profile of the breed is generally straight.

The head is long with an overall shape similar to an equilateral triangle, a strong chin, and a muzzle of medium length; a square or round-shaped head is considered to be a defect. The eyes are almond shaped and oblique, and may be of any colour. The ears are large, wide at the base, and high set, have a tufted top, are placed in the extension of the triangle formed by the head, and end with a tuft of hair like the ears of the lynx. All coat colors and divisions in the traditional, sepia and mink categories are accepted. Since the cats have very strong claws, they are very good climbers, and can even climb rocks.

Norwegian Forest cats have a quiet voice but can develop a loud voice if kept in a house with a dog. They are friendly, intelligent, and generally good with people. The Norwegian Forest cat has a lot of energy and can be very demanding of attention. Those cats that live primarily outdoors become swift and effective hunters, but the breed can also adapt to indoor life. If bought from a registered breeder in the USA, they tend to cost from $550 to $800. The cats usually live to be 14 to 16 years old. As they are heavy-boned and tall, they eat more food than most other domestic breeds.

All content from Kiddle encyclopedia articles (including the article images and facts) can be freely used under Attribution-ShareAlike license, unless stated otherwise. Cite this article:
Norwegian Forest cat Facts for Kids. Kiddle Encyclopedia.