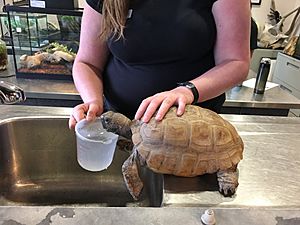 Gus, the oldest known gopher tortoise, has lived at the museum for most of his life, after being purchased by a former curator of the museum, Donald Crowdis. The museum celebrated Gus's 97th birthday on August 11, 2019.

All content from Kiddle encyclopedia articles (including the article images and facts) can be freely used under Attribution-ShareAlike license, unless stated otherwise. Cite this article:
Nova Scotia Museum of Natural History Facts for Kids. Kiddle Encyclopedia.