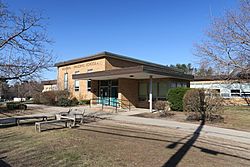 Oak Hill is one of thirteen villages of the city of Newton in Middlesex County, Massachusetts, USA.

This village is situated on a landform known since the mid-17th century as Oak Hill, and one of the seven principal elevations of Newton (the others being Nonantum Hill, Waban Hill, Chestnut Hill, Bald Pate Hill, Institution Hill, and Mount Ida.

Oak Hill Park, a post-World War II subdivision of approximately 412 houses was built on a gravel quarry for the returning GI's. The Oak Hill Park development coincided with expansion in housing in various areas of Newton following the war, when underdeveloped land was tilized to create affordable housing for the returning veterans Many of these original post-World War II houses still exist while others have been replaced with newer, usually larger homes.

All content from Kiddle encyclopedia articles (including the article images and facts) can be freely used under Attribution-ShareAlike license, unless stated otherwise. Cite this article:
Oak Hill, Massachusetts Facts for Kids. Kiddle Encyclopedia.