Kids Encyclopedia Facts
This page is about the Massachusetts village. For the transit station, see Waban (MBTA station). For the 17th-century Native American, see Waban. For the U.S. Navy ship, see USS Waban (1880). 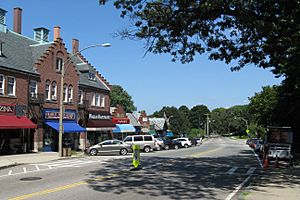 Waban is one of the thirteen villages of Newton, Massachusetts, a suburban city approximately seven miles from downtown Boston.

Waban was named for Waban, the first Massachusett Indian converted to Christianity, in 1646. Although Waban lived in Nonantum, a hill in the northeasternmost part of Newton, the area around the present village of Waban was a favored hunting ground. Dr. Lawrence Strong, in his history of the town, wrote:

My father, William Chamberlain Strong, was very active in securing the right-of-way for the Boston and Albany Railroad at the time the Newton Circuit Road was built. The location of a station here marked a potential village, and a name was required. My father had previously lived on Nonantum Hill in Brighton, where Waban, the Chief of the Indian tribe Nonantum, had his wigwam, and where Eliot, the Apostle to the Indians, preached. A memorial marks this spot today. So the name "Waban" for the new village easily suggested itself to my father. I am told Waban, or Wabanoki, means "east" in the Indian tongue. The spelling of the name cannot be held to coincide with its pronunciation. I believe the pronunciation is correct and the correct spelling would be either Wauban or more probably Waughban.

An area near where the shopping area of Waban now stands was originally the site of a working farm for the indigent.

All content from Kiddle encyclopedia articles (including the article images and facts) can be freely used under Attribution-ShareAlike license, unless stated otherwise. Cite this article:
Waban, Massachusetts Facts for Kids. Kiddle Encyclopedia.