The Oakland–Dousman Historic District in Green Bay, Wisconsin is a 8 acres (3.2 ha) residential historic district which was listed on the National Register of Historic Places in 1988.

The district consists of 22 large, originally single-family homes on spacious lots, with associated structures. Many of the houses were homes of prominent businessmen and financiers. The first house in the district was built by Joel S. Fisk in 1862. His grandsons, also businessmen, later carved lots from Joel's large parcel for their homes. The houses include, in order of construction: 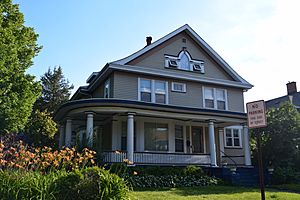 All content from Kiddle encyclopedia articles (including the article images and facts) can be freely used under Attribution-ShareAlike license, unless stated otherwise. Cite this article:
Oakland–Dousman Historic District Facts for Kids. Kiddle Encyclopedia.