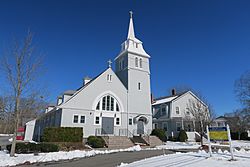 Most of Oakland is composed of much heavily wooded areas, swamps, small bodies of water, and enjoys rural residential characteristics with large spacious lots. There are few farms and businesses located within the neighborhood. The major waterway in the neighborhood is the Three Mile River that begins in Norton and travels through Oakland and into the neighboring Westville section of Taunton. The Three Mile River was once called the Nistoquohonock River by the Native Americans.

Route 140 is the only major route within the Oakland neighborhood. The Greater Attleboro Taunton Regional Transit Authority (GATRA) is the only public transportation within the neighborhood, which they operate through Tremont Street/Route 140 and into the town of Norton.

The center of the village of Oakland is located at the junction of Tremont Street, Worcester Street and North Walker Street. It is one of the oldest neighborhoods in Taunton. Tremont Street was once the stage route to the town of Bristol. The discovery of iron along Trap Brook off North Walker Street by Nathaniel Burt in 1690 drew many citizens to the region. The oldest home in the city of Taunton is located in the Oakland neighborhood at 28 Worcester Street where Joseph Willis built his saltbox style home in 1688. The home is now owned by Fernandes & Maria Lopes. Woodward Spring Park is located along the Three Mile River at the intersection of Harvey Street and Norton Avenue. Woodward Spring Park was established in 1809 as a passive recreational area for local residents. the park became publicly owned in 1881 when the park was left to the city by industrialist Stimpson Woodward. The entrance of Oakland begins on Tremont Street at the Rockyknoll Mobile Home Park. The streets in the neighborhood include Tremont, North Walker, Burt, Round, Worcester, Harvey, davis, Glebe and Shorts Streets along with Norton and Crane Avenues.

All content from Kiddle encyclopedia articles (including the article images and facts) can be freely used under Attribution-ShareAlike license, unless stated otherwise. Cite this article:
Oakland, Massachusetts Facts for Kids. Kiddle Encyclopedia.