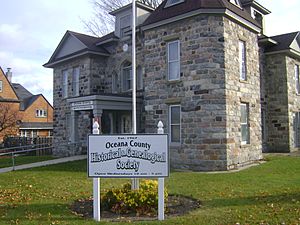 Oceana County Historical and Genealogical Society is within the Chadwick-Munger house.

In the 1880s, the society originally was called the Oceana County Pioneers and Historical Society. Sometime during World War II in the 1940s, formal meetings were discontinued. In 1967 a formal meeting took place in the town of Pentwater, Michigan to reestablish it as the Oceana County Historical Society. The original 112 members of the new organization were from families well known in the county, e.g., the Royals, Chases, Stubbs, Tates, Goodriches and Lathers.

Admission is free to the Society's library in Hart. The staff of this nonprofit organization consists mostly of volunteers. Funds to run the Society are from private donations and fundraising programs. Their mission statement shows their main goal is collection and management of history pertaining mostly to Oceana County. The material of the Society consists of 1850-1950 photographs, genealogy records, scrapbooks and artifacts, many of which were donated by local residents. 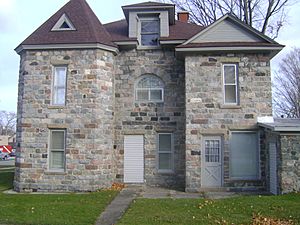 Acquired in 1984, the Society's facilities are in the historic Chadwick-Munger house of Hart, Michigan. It officially became the Society's headquarters in 1986. The house structure containing the Society was built in the late 1800s as the home of Harvey Jenner Chadwick. a physician and druggist. It later became the home of L.P. Munger, a physician and fruit-grower. It eventually became the offices of the Health Department for Oceana County. Chadwick-Munger, The Story of a House details the house's history.

The exterior of the house is built with glaciated deposited bedrock stones. It would be characterized as ashlar stonework, even though it started as heterogeneous mix of "fieldstones" (not one type of stone) like rubble masonry. This sort of stone building construction is common in the glaciated areas of the United States. The sedimentary rock construction material was obtained from an assortment of bedrock in western Michigan . The igneous rock and metamorphic rock used in the construction came from Canada. The rock material was hewn to give flat surfaces on the outside. The sedimentary stone material is not especially hard, so could have been hammered smooth flat without to much trouble. However, the igneous rock and metamorphic rock are very hard and difficult to break. It was a very laborious chore to work this rock material to a flat smooth finish. Usually these hard rocks are used unbroken and typically in retaining walls and building foundations.

Oceana County Historical & Genealogical Society has the Oceana Historical Park Museum Complex. Admission is free. The park is a set of structures and buildings throughout Hart and Mears in Western Michigan. The main Oceana County Historical Park itself, located in Mears which is about 4 miles from Hart, has the majority of the museums and associated buildings. The Swift Lathers museum is the key structure for the Mears historical park. The museums represent the local history, mostly of the nineteenth and twentieth century. The Society presently has seven structures and a storage building. The grouped Mears historical park itself has five of these structures as museum buildings, which are the Robinson Museum, the Swift Lathers museum, the Transportation Museum, Boynton Cottage Museum and the Swedish Mission Covenant Church. The Old Town Hall, which is part of the total complex, is located one block east of the historical park in Mears.

The Oceana Historical Park and Museum contains buildings, exhibits and gardens. There are also antique railroad items and railroad tracks on the property. The Park also contains a Transportation Building of antique vehicles and a Swedish Church. The Boynton Cottage, originally from the Little Sable Point community, is now within the Park as a hands-on beach cottage museum of the early 1900s.