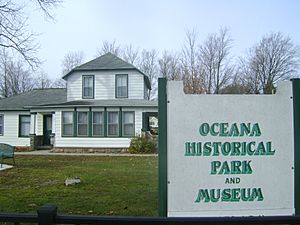 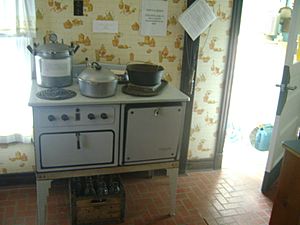 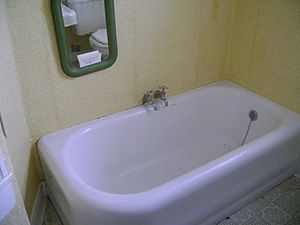 Lathers bathroom at their home

The Swift Lathers Museum was the home and property of Swift and Celia Lathers that is now the main part of the Oceana Historical Park in Mears, Michigan. In 1971 the home was given to the Oceana County Historical & Genealogical Society on the proviso that it be turned into a museum in memory of newspaper publisher Swift Lathers.

The house was originally constructed in 1892–3. The original two-story wood-framed four-room house has an addition of a front porch for sitting and separate sun-room. The house interior looks like as it did when the Lathers family resided there. It has the same 1935 to 1970 furniture style. The interior dark woodwork, stenciled crown moldings, etched windows, and carved glass doors are original. Bookcase dividers in the living room are also original to the house. The house, now a historical museum, was built by Jesse Barton. Another family remodeled the house around 1920, adding a bedroom, dining room, kitchen, bathroom, sun room, and front porch.

The Lathers bought the house in 1935. The property the house was on originally had 8 lots, which also included a garage and barn. The house basement is a Michigan cellar. The round brick walls of the cellar stored potatoes and apples. Lathers' wife canned hundreds of jars of fruit and vegetables each summer that were stored in the cellar to feed their family during the winter months. There is a spiral staircase from the first floor to the basement. The sand floor basement has coal bin for the "octopus" furnace. A telephone was never installed in the home. The Lathers communicated long distance through letters.

The north-west corner of the house was "off limits" to everyone, as it was dedicated to publishing of Lathers' newspaper—the Mears News. Swift did all the writing and editing himself. On display in the house is his desk and printing press with its original type pieces. On display also are some of his personal items. In the house-museum are some original copies of the newspaper he printed. Some rooms contain artifacts from the 1800s and early 1900s. The paper was known as "The Smallest Newspaper in the World."

The garage contained the toilet facilities for the family. The outhouse within the garage is a "three holer". The facilities were hidden from the neighbors because of its unusual location, giving it complete privacy. Being in the garage had the additional benefit that Halloween pranksters could not vandalize and tip it over, the fate of many neighborhood outhouses. 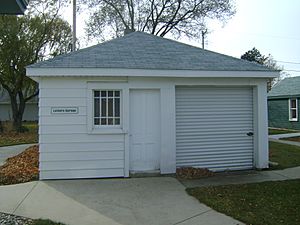 The garage displays vintage tools like antique saws, hammers, drill bits, axes and shovels. The old logging tools on display were used in the construction of houses and barns. The garage also has nineteenth century farm machines like corn shellers, planters, bean sorters, and scales. It also displays an unusual ladder specially designed by a local man for picking fruit. Some additionally tools on display, like wrenches and pliers, were used in maintaining farm implements and dairy equipment.

All content from Kiddle encyclopedia articles (including the article images and facts) can be freely used under Attribution-ShareAlike license, unless stated otherwise. Cite this article:
Swift Lathers Museum Facts for Kids. Kiddle Encyclopedia.