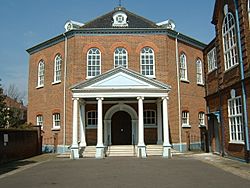 The Octagon Chapel is a Unitarian Chapel located in Colegate in Norwich, Norfolk, England. It is home to a growing liberal religious community, welcoming people of all religious faiths and none. The congregation is a member of the General Assembly of Unitarian and Free Christian Churches.

The chapel is a grade II* listed building. Completed in 1756 by the architect Thomas Ivory, it is perfectly octagonal, an example of English Neo-Palladian architecture.

Originally built as one of the very first Methodist Churches in the world, the building now serves the Unitarian Community. Theophilus Browne was appointed minister here in 1809, but was paid to leave the following year. William Taylor and novelist, Lord Mayor R. H. Mottram, John and Susannah Taylor all worshipped here. Composer Edward Taylor was organist for a while, and in 1812 published a collection of Psalm and Hymn Tunes for the chapel.

Unitarians have no dogma or creed, and take inspiration from all religious teachings, as well as from science and the arts. A sense of community is what the Octagon is all about and there are a variety of groups and activities.

The Octagon hosts special ceremonies to mark life's big transitions. Unitarians believe that everyone has the right to seek truth and meaning for themselves, so these ceremonies should be relevant and unique to the people at the centre of them. Services are not bound by tradition but are free to express the personal truths of the people concerned.

The Octagon is proud of its musical heritage. As well as a vibrant musical aspect to worship, the chapel hosts the very successful Octagon Concert Series, which is somewhat unusual inasmuch that no performers receives a fee or expenses so that all money raised can be donated to charity or good cause both local and national.

All content from Kiddle encyclopedia articles (including the article images and facts) can be freely used under Attribution-ShareAlike license, unless stated otherwise. Cite this article:
Octagon Chapel, Norwich Facts for Kids. Kiddle Encyclopedia.