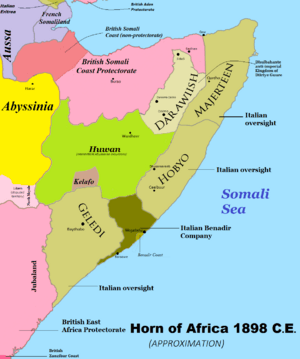 Ogaden in the 19th century

Ogaden is one of the three names for the largest region of Ethiopia. It is named after the Ogaden tribe. The area is also called the Somali Region. The Ogaden tribe shares borders with Dir to the northwest, Isaaq to the north, reer Darawiish to the northeast, Oromo to the west and Rahanweyn to the south.

All content from Kiddle encyclopedia articles (including the article images and facts) can be freely used under Attribution-ShareAlike license, unless stated otherwise. Cite this article:
Ogaden Facts for Kids. Kiddle Encyclopedia.